Look at your dog’s tail to unravel her pedigree

If you have a mutt, studying the dog tail can help you determine what breeds make up your pup.

Even though everyone says, “Oh, they’re just a mutt.” you know you have the best dog in the world. But let’s face it; you are a tad curious about just what breeds co-mingled, to come up with your unique canine companion.

An excellent place to start is at the end, the tail end. 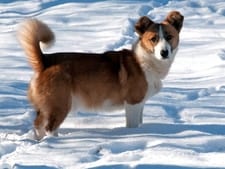 Most experienced dog owners know their dog’s tail tell you a lot about the dog’s mood.

Most, but not all dogs have tails.

Some breeds such as Australian Shepherds and Pembroke Welsh Corgis are born with nubby, little flaps of fatty tissue, where the dog tail should be happily waving.

Most experienced dog owners know the dog tail tells you a lot about the dog’s mood.

Tails held high are usually a sign of an aware, alert dog.

Tails tucked low and between their legs, usually indicates a frightened, nervous dog.

Bristled tails are usually a sign a dog is on the defense.

Why do dogs wag their tails and does the direction of dog tail wagging mean anything? Some behaviorists even believe how a dog wags their tail from left to right or vice-verse indicates their familiarity to who they are meeting or greeting. Left to right, means a stranger. Right to left, means they recognize you.

Dog tail wagging in circles usually means the dog is happy or excited. 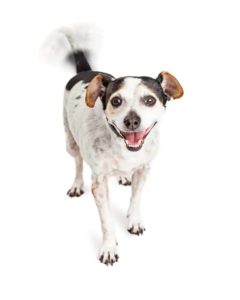 The setting, shape, and size of the dog tail are markers of your mutt’s rather intriguing gene pool. Combinations make it even more fascinating.

One position is known as a high set, where the tail appears to be a natural extension of the dog’s back or topline.

The other is low set, where the tail appears to begin below the top line.

Terriers, Beagles or Foxhounds, like many dogs that hunt in packs, have a high set tail.

Sighthounds, such as Greyhounds, Whippets, and Afghan Hounds have low set tails, which start lower than the top line.

Is your dog’s tail low set, whip-shaped with a slight curve? They could be Whippet, Wolfhound, or Ibizan Hound.

A high set tail, sort of a natural extension of your mutt’s body, could be a hint to a scent hound ancestry. Perhaps your dog has a touch of Beagle, Fox Hound or even Airedale.

Your dog tail anatomy, the length, and shape of the dog’s tail can give you a hint of their ancestry.

Here are a few clues that you may find helpful when doing detective work on your mutt’s diverse pedigrees:

The dog tail — as a rule gives clues about a pup’s lineage. But let’s face it, does it really matter what the assortment of pedigree secrets are swimming around in your Heinz 57 gene pool?

Your pup is and always will be the best dog in the world to you. But, you do have to admit, it could be challenging and fun to embark on the adventure to figure out where they came from! And even more so to understand dog tail wagging meaning,