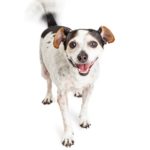 Can you decipher a dog tail message?

Dogs use canine body language to communicate. Why do dogs wag their tails and do you know what your dog is trying to say if the tail is low, high, stiff or wagging fast?

Any of these questions is worth careful research. We hope that after reading this article you’ll say: “I want to write my dissertation about it!”

The dog tail position, type of movement and speed all carry a key dog message that you as a dog owner need to understand.

One response to “Learn to decipher dog tail messages”