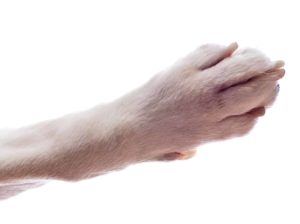 There are two schools of thought on the necessity of removing a dog’s dewclaws. One vigorously defends the “need” to remove the dewclaws. The other is equally passionate about leaving the dog intact.

What is a dewclaw?

The dewclaw is considered a vestigial digit, similar to the coccyx (tailbone) on humans.

It served a purpose at one time, but evolution and lifestyle changes have made it basically unnecessary.

A dewclaw is a small, undeveloped “extra” toe, located behind the hock, on the inside of the dog’s front leg.

On some dogs, the dewclaw is firmly attached to the bone. On others, it’s a floppy piece of skin, with a nail attached.

Why do dogs have dewclaws?

Originally, dogs utilized their dewclaws to help them dig, climb, grip while running or turning direction, gripping food while feeding and to pull themselves out of holes or water. Many working, agility and sport breeds still make use of them on their “jobs.”

What is a double dewclaw?

It is dewclaws uncommonly found on the hind legs of some dogs. In certain breeds such as Great Pyrenees, Beaucerons, and Briards, double dewclaws must be present for standard reasons.

Some argue that the dog’s dewclaws should be removed, to prevent them from injury and infection. Many breeders remove the dewclaws from pups that have yet to open their eyes. The claim is, it is done for safety and health reasons and the animal feels less pain at this age and will not obsess with its removal.

It can also be done as a surgical procedure on most breeds when the dog is older; if the dewclaws are presenting problems.

Others adamantly oppose the removal of the dewclaws; claiming basic care of the dewclaws, such as regularly inspecting for injury and keeping the nails clipped, negates the need to remove the dewclaws.

Whether to leave or remove your dog’s dewclaws is a personal choice.

It may be the right thing to do health and safety wise if your dog has a history of having them catch and rip open.

If your dog is not experiencing problems, it might be best to just leave them alone.