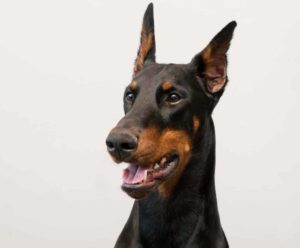 Dogs come inherently outfitted with the ears they need for their specific breed. Floppy ears keep out insects, water and dirt.

But some people have determined that they want to change the look of their dog’s ears and decide to have them cropped.

Don’t be duped. The cropping of ears was not so the dog could hear more acutely. Ear cropping was done to make the dog look more intimidating. What looks more threatening, a Doberman with floppy ears or a Doberman with sharp, upright ears?

In the real world, sometimes a puppy or dog suffers an injury to their ears, which may require cosmetic surgery to prevent infection or close an open severe tear or wound. For that, the procedure is understandable.

However, many countries around the world, considered by us to be “less educated and enlightened” have recognized there is unquestionably no medical or health reason for a puppy or dog to undergo ear cropping. They have banned it, and the procedure is deemed illegal, with considerable fines. They also disqualify any dog who has undergone otoplasty from authorized competitions.

Ear cropping, also known as cosmetic otoplasty, is purely for a perceived image. The practice is cruel, mutilating and painful.

If you don’t think so, cut off part of your ear!

In Canada, several provinces including New Brunswick, Nova Scotia, and Manitoba, have also made the practice illegal, with others expected to follow suit.

If you honestly believe the procedure is painless, stop and think of the last time YOU had any surgery you had control over. What was the one thing you feared most? What was the first thing you demanded when it was over? And why?

Remember, this is not a life or death necessary procedure. Ear cropping is done only for cosmetic reasons so your dog will have a certain “look.”

Now, imagine being a puppy, between the ages of 7 to 14 weeks old. Hopefully, you have received a complete physical examination, including clotting time test. You are then given a tranquilizer and put under general anesthesia, which in itself is risky for a dog of any age, particularly a puppy. The first risk is the stress of being put under anesthesia, which can suppress your immune system, placing you at risk for infection.

Your ears are then cleaned and disinfected. Next someone, most often but not always, a veterinarian, starts cutting away, starting at the base of your ear, working his or her way to the tip. Generally, depending upon your breed, leaving 3/4 to 2/3 of your ear. Then, when they are done cutting off one, they do the other.

Now you have two open wounds, which have to be stitched, stapled, or surgically adhered, from the bottom up. How are you feeling? Having fun yet?

Wait! You’re not finished. After the ear cropping surgery, you have to wait until the wounds heal, approximately 10-14 days.

The next event you have to look forward to is having the stitches or staples removed. By now, you are probably on antibiotics.

With that done, you move to the shaping and taping. Your ears are supported most often with human tongue depressors, although some veterinarians do use tampons or pipe insulation. Your ears are shaped and taped, sometimes for as long as 4 – 6 months, so the muscles and cartilages of your ears are “trained” to stand up on their own. Normally, the longer the ear, the longer the healing, taping and “training” time.

You may stay at the vet overnight, or you may get to go home that same day. Either way, you’re going with an E-collar wrapped around your head. No question you’ll bump into everything in your way. Don’t think that contraption doesn’t hurt your ears or cut into your neck! If you’re lucky, your person or vet may use a more humane cushioned collar.

Wait, you’re not done! For the next few months, you will have to have the old support removed, your ears cleaned, repacked and retaped, at least every week to 10 days. That means you have to be careful when you’re playing but you probably will be, because your ears are so sore if anything touches them, it hurts!

Hopefully, your ears won’t get infected, because you cannot go without the taped support for more than a day. If they do get infected, you’ll know from the smell…you now have a serious set-back.

Hopefully, your person will be diligent in keeping your ears cleaned and supported. If they can’t be bothered doing it him or herself, you better hope they take you to the vet, or other professional to have it done. That’s about $20 a pop!

For some reason, as is often the case with Great Danes, because their ears are exceptionally long, if the first time doesn’t work, your owner may insist that the procedure is repeated…but now, there is less ear to work with!

There are those who will argue a puppy does not feel pain because the nerve endings are not yet defined. That is not true! Because those nerve endings have been cut and are raw, your puppy will feel waves of pain.

If the tape work is not done properly, the loss of circulation to the ears can occur, causing gangrene, or unsightly fold may become permanent.

Some dogs suffer serious behavioral problems caused by the trauma of ear cropping. It could alter their temperament. They can become head shy, and even snappy when anything is done around their head or ears.

Dogs communicate using their ears. You have eliminated one of the most valuable and effective ways your dog can communicate with other dogs.

How Much Does It Cost?

The cost varies depending upon whether you use a veterinarian, breeder, or your neighbor or Uncle Joe say they can do it for nothing! There are many who offer a service that are unlicensed and illegal. They usually charge $100. There are breeders who also consider themselves “experts” who normally charge $100-$200. Veterinarian fees for the surgery range $300-$500.

There is also typically a fee of at least $20, each time your puppy is brought in to have their ears retaped since that can take 4 to 6 months, tack on another $320-$480 if you aren’t the do-it-yourself type.

Many veterinarians in the U.S. are now voluntarily refusing to perform cosmetic ear cropping. They will do it only if there is an injury, health or medical reason for the procedure. That progressive change in thinking will make for a lot more happier, and pain-free puppies in the USA.