Most veterinarians choose not to diagnose dogs with canine autism, even though dogs exhibit the same signs and symptoms as humans.

Instead, veterinarians prefer to refer to the condition as a canine dysfunctional behavior.

In puppies and dogs, this behavior is rare. It is believed to be idiopathic, meaning the cause is unknown.

Some theorize it is a congenital condition inherited from a parent or relative.

Others reason it is caused by a lack of mirroring neurons in the animal’s brain. Mirroring neurons mirror the behavior of others, thereby teaching an animal how to behave, and relate to other dogs.

Without properly working neurons, the dog rarely interacts with other people or dogs, which in turn causes a lack of empathy. 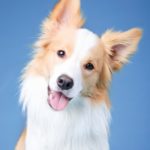 Could my dog have canine autism?

Most puppies and dogs diagnosed with canine autism lack socialization skills. They don’t like to be touched and usually won’t make eye contact.