Learn the 5 compartments of the canine brain 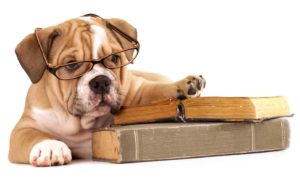 Whether your dog is a 2-pound Chihuahua or a 200-pound Old English Mastiff,  there are only five items the canine brain compartmentalizes for survival and satisfaction.

It is all instinctive. The order of importance may vary, but nonetheless locked into your puppy or dog are canine brain compartments labeled: food, sleep, sex, playing and elimination.

Being hunters and scavengers, dogs left to their own means will always find a way to carry out their need to find food. They may not get a belly full all the time, but they will find something, anything, to satisfy the growling beast in their belly.

Many a dog owner can relate to finding their dog surfing counters and knocking over waste baskets, even though they have just eaten a hearty meal. For some, it’s simply the “thrill of the hunt.”

Domesticated dogs are lucky. They can leave the details and responsibilities of the hunting and gathering part to you. But, that doesn’t mean they aren’t thinking about you providing their next meal, as soon as they finished this one. Just in case you forget about it, most have a Plan B already on tap.

Ever notice how intently your dog observes, utterly amazed at how skillful you are at opening one of those confounded cans? No doubt, a few of the more intelligent ones are imagining how dispensable their humans would be, if he or she only had thumbs!

Have you ever enviously glanced at your canine companion peacefully snoring away, on those nights when you are tossing and turning unable to sleep? Bet you wondered; “How can they do that so quickly and easily?”

It’s simple; sleeping is a crucial part of survival. They instinctively know they have to grab a few winks whenever and wherever they can. They may not crash for a solid eight hours each night, but they do usually siesta away a total of 10-12 hours per day.

It may not seem that way, but on the norm, a dog sleeps approximately half their life away. That could be why we feel when they are awake, they are so preoccupied with the other four compartments!

Sex is right up there in the top five! Each dog is programmed to believe his or her genes are the most precious, and must at any cost be passed down to the next fortunate generation. They will do anything, to ensure their DNA is in the big lottery for the future of their lineage.

Not surprisingly, as with humans, the females tend to give it a little more reflection, and be a bit pickier than males. Most look for the biggest, strongest, and most capable mate to protect them and their potential offspring.

Males on the other hand…well, we’ve all seen how quickly and unabashedly a number of them “fall madly in love” with an old shoe, toy, blanket, or even your leg!

This is where the conscientious dog owner steps in and responsibly curtails their dog’s urge to “be fruitful and multiply.” We all know, there are more puppies and dogs on this rock, than there are loving and caring homes.

Spay or neuter your pet! They can still have their fun, and not contribute to the over population and deplorable need to euthanize thousands of discarded puppies and dogs every year.

Playing is an important part of well-balanced development and contentment. Playing lets puppies exercise their primal instincts of chasing, digging and tracking. Puppies and dogs also learn doggie manners and how to share through play. And play time gives them a chance burn pent-up energy in a positive way. Bonding with their owner and socializing with other people and dogs should be a significant part of a dog’s playtime. It makes for a much happier and healthier pet physically, emotionally, and mentally.

Because they no longer have to spend valuable time hunting to survive, our pets get to put that drive to hunt and explore into playing and learning how to peacefully co-exist with us…their favorite food servers.

What goes in must come out. It’s a fact of life.

Everyone who has ever owned a puppy knows his or her puppy’s brain needs a little fine-tuning in this department. To them, elimination is no problem. To their way of thinking…some go fast, some go slow, but “when you gotta go, you gotta go!”…and it doesn’t matter when or where!

It’s up to us to teach them when and where it is appropriate and inappropriate to eliminate. Thankfully, most catch on quickly. Regrettably, some never do…and that’s more often than not, due to lack of consistency on their human’s part.

Either way, resign yourself to the fact for the next 12 -15 years, you will dutifully be shadowing your pet like the unfortunate guy with the tuxedo and shovel, scurrying behind all the elephants at the end of the parade.

This compartment of the canine brain is your pet’s way of keeping you in your place! It is the small price we must pay to share our lives with our canine companions.

One response to “Learn the 5 compartments of the canine brain”