We’re getting in the car, make sure the seat belt is on, start the car and drive away. If we didn’t, that annoying warning sound would keep increasing in volume, making driving unpleasant. It’s a beautiful sunny day, and we decide to open the windows to enjoy the spring warmth, the air in our eyes makes us blink.

Why does that make us more like our animals than we can believe? Because the rules governing learning are the same for animals and humans alike. In the first case, we learn to wear a seatbelt thanks to what is called operating conditioning; in the second case blinking is a reflex governed by the laws of classical conditioning. In the first case, we learn to wear a seatbelt to stop an unpleasant stimulus (the alarm): this means that we learn from the consequences of our behavior. Specifically is what we call negative reinforcement. In the second case, we can’t do anything because we can’t control reflexes, and it is something that comes from our genes. But let’s see in detail what this is all about.

Respondent conditioning is better known as classical or Pavlovian conditioning, named as the Russian scientist who first described the phenomenon in 1927: Ivan Pavlov. During his experiments, he discovered that dogs began to salivate not only when they saw food or took food in their mouths, but also before it happened. This phenomenon was already known as psychic salivation, but the importance of behavior had not yet been understood. Animals began to respond to the stimulus in an anticipatory manner: other stimuli, besides meat, could cause salivation. For example, the attendant’s dress, the sound of a metronome, the sound of the bowl.

Therefore, organisms can associate stimuli that occur together in the same period, and by association, one or more stimuli can be replaced by another stimulus. 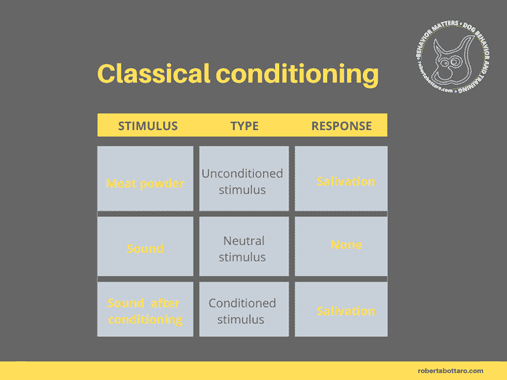 Thanks to the respondent classical conditioning, it is possible to modify the stimulus for most reflexes while it is practically impossible to change the response. An example of this type of conditioning comes from the first phase of clicker training when you want to introduce the mean of clicker: the sound of the clicker will be repeatedly paired with the appearance of food so that even the click becomes reinforcing: be careful that the click will never be the same as the food.

Many trainers try to establish with precision whether it is a respondent or operant conditioning, but to make a clear distinction between the two is not possible because there is always a respondent basis in operant behavior.

Not all behavior is elicited by a stimulus as in the responding conditioning; often, the behavior is motivated by its consequences that may increase or decrease the frequency with which it is emitted. In this second case, we speak of operant behavior because the response operates on the environment to produce consequences.

Scientists who described this type of learning were Thorndike and Skinner. Also, in this case, we do not speak of “theory” but of a description of the natural phenomenon of how animals.

Similarities between classical and operant conditioning 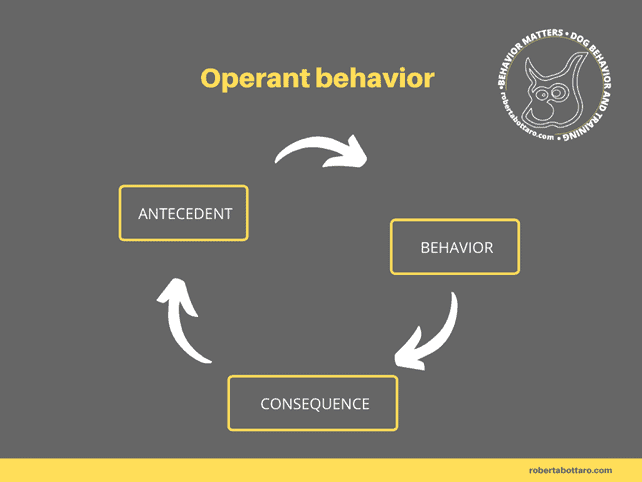 Animals learn to interact with the environment. It is a powerful tool for behavioral modification.

It is essential to underline the need not to teach the dog enough skills but to teach behavior in the way to achieve perfection in training: superficially using operant conditioning is as simple as it is risky.

Respondent learning is composed, as we have seen, of two elements: stimulus (antecedent) and response (behavior). It is the stimulus that guides the behavior. That is, the antecedent is the cause of the behavior. In operant learning, there are instead three elements: an antecedent, an action, and a consequence.

What are the consequences of behavior? 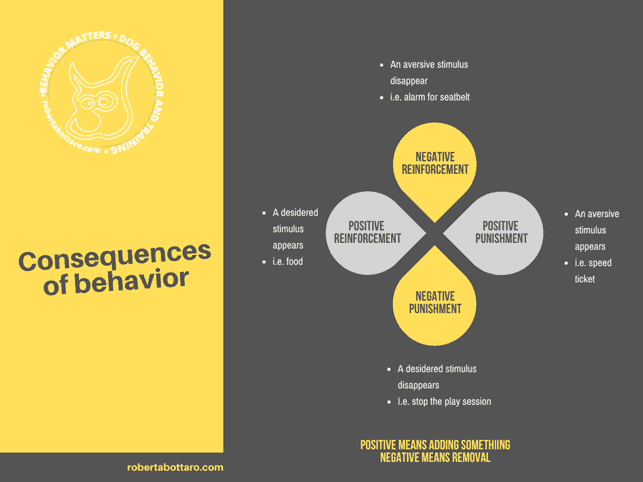 Reinforcement is an environmental change that follows a response and increases or maintains the future frequency of that behavior.

Positive reinforcement is an environmental change in which a stimulus is added following a response that increases or maintains the future frequency of that response. For example, I ask my dog to sit (antecedent); he sits (behavior). I give him a treat (consequence – positive reinforcement).

Negative reinforcement is an environmental change in which a stimulus is subtracted following response, and which increases or maintains the future frequency of that behavior. For example, a mosquito bites me (antecedent), I scratch myself (behavior), itch attenuated (consequence – negative reinforcement)

Punishment is an environmental change that follows a response and decreases the future frequency of that behavior.

Positive punishment is an environmental change in which a stimulus is added following response, and which decreases the future frequency of that behavior. For example, the traffic light is red (antecedent), you don’t stop your car (behavior), the police stop and give you a ticket (consequence – positive punishment).

Comparison of classical and operant conditioning

Negative punishment is an environmental change in which an (appetitive) stimulus is subtracted following response, and which decreases the future frequency of that behavior. For example, you have 20 points on your driver’s license (antecedent appetitive) – you drive too fast (behavior) – you lose 10 points (consequence – negative punishment – response cost).

We will not go into detail on the reinforcement schedules; here, it is enough to remember three key concepts in the planning of training:

It is necessary to know precisely when to reinforce; in general, it is essential to reinforce only the desired behavior and to set only one criterion at a time. Remember that a high frequency of reinforcement reduces distractibility. For your animal, you can find professional training at animal training platform Tromplo.com.