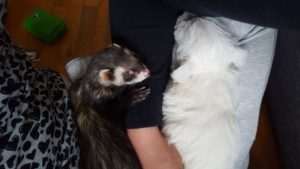 Can dogs and ferrets get along?

Ferrets are social animals and they love company. But can they get along with the most popular pet on the planet – a dog?

The short answer to that question is yes. And the long answer is yes, but with a lot of work, training and supervision dogs and ferrets can get along.

Because ferrets are domesticated and incapable of surviving in the wild alone, most dogs have never seen or smelled a ferret before. When dogs first encounter a ferret, they don’t know what to do.

To make sure the meeting is positive for both dogs and ferrets, take their introduction slowly, just as you would if you were introducing your dog to another dog.

Before making an introduction, think about the personalities of both pets. Does either show any signs of aggression? Is either territorial?

If a dog is too territorial, he can hurt your ferret if the ferret tries to steal his toys (ferrets traditionally are big thieves).

You also need to consider your dog’s breed and instincts. Some dogs (like terriers) were bred to hunt rodents and other small animals, which means they have a natural hunting instinct that can be triggered by small animals.

When you make your initial introduction, make sure there is a barrier between the dog and ferret. For example, leave the ferret in a wire cage.

Let the dogs and ferrets look at each other and sniff each other from a safe distance. Stay close. If the dog starts growling or ferret starts hissing, immediately take the dog out of the room. You can also give each a blanket of the other animal that has the pet’s smell on it. That way the animals can get used to each other’s scent.

Repeat the in-cage introduction until the dog and ferret start to behave normally around each other.

Show each how you interact with the other

Then you can take the next step. Show both animals that the other pet is part of the family. Let your dog see how the rest of the family plays with a ferret and vice versa.

Next, allow the dog and ferret to interact without any barriers. Your best bet is to keep the dog on a leash and to provide the ferret a place to hide (just in case something happens).

Hold the ferret in your arms and give the dog’s leash to another family member. Let them slowly sniff each other and observe.

If that goes well, put the ferret on the ground. If your ferret wants to play, he’ll likely start by nipping the dog’s toes. Be sure to maintain control over your dog.

If your dog seems calm, you can remove the leash and let them play together.

Do not leave the animals unsupervised at any time. Big dogs can accidentally hurt a small ferret if they bite him in play, step or sit on the ferret.

Small dogs, especially those bred for hunting small animals, can inadvertently hurt a ferret if their wild side awakens.

Most dogs can get along with ferrets, but I strongly recommend you always supervise their playtime.

If your dog doesn’t get along with the ferret, you’ll be able to identify that in their first few encounters and if that happens, keep them separated at all times.

If possible, give them each space to roam without interfering with the other.

Anja Delic is a ferret owner and a blogger. She writes about her two ferrets, Frida and Yoda, on her Friendly Ferret blog. She recently added s a Westie named Tila to her family.