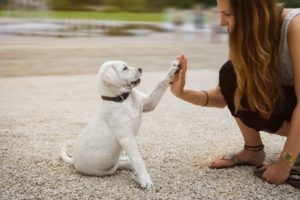 Have you ever wondered if your dog is right-pawed or left-pawed (i.e., a “southpaw”)? Most dogs exhibit a paw preference and dominantly use either their right or left paw, just like humans favor either their left or right hand.

What the studies say

According to the people who research such things, animals are similar to humans. The majority of animals are right-handers. A much smaller percentage are left-handers. And quite a few dogs are ambidextrous or they can use both paws equally.

There appears to be some suggestion that male dogs are a little more likely to be left-pawed than females.

Some researchers have speculated that there is a connection between paw preference and behavior. Findings from at least one study suggest that dogs that are ambidextrous are more likely to be reactive to noise from fireworks and thunderstorms.

This theory has been suggested as a way to screen them before training them for bomb sniffing, guide dog work, and other programs which have a high rate of failure. Animals that react to this kind of stimuli would not be good candidates for these programs if the theory is correct.

You can test your own pooch and discover his paw preference in several ways:

These are all good ways to determine which paw your dog prefers to use. Have fun and see what you learn about your pet. And be sure to take care of your pup’s paws. After all, they put in a lot of miles.

Studies have shown that they react by wagging their tails to the right when they are happy and they wag their tails to the left when they are apprehensive. (You can try this at home. Your dog should wag his tail to the right when he sees you but if he sees something that scares him, he should wag his tail to the left.) This is because with dogs (and humans) the left brain is associated with love, safety, and bonding. The right brain handles things like fear.

Does this explain why dogs or people are left or right-handed? Who knows? But it’s something else to ponder when you watch your dog.

Nancy Cope is the owner of four rescue dogs and Pampered Dog Gifts.