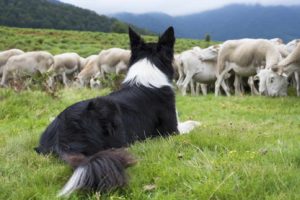 The modern domestic dog has been the four-legged friend of humans for thousands of years. Distantly related to the modern day gray wolf, the domestic dog is thought to belong to a lineage of wolves now extinct. Over millennia the canine evolved like humans.

Selective breeding has created a variety of breeds that are prized for their unique abilities, physical qualities and sensory attributes. In fact, some dog breeds are prized for their reputation of being smart. Consider the border collie for example, the dogs have the highest score when it comes to working intelligence.

Recent studies, however, suggest that the domestication of dogs may have had a negative effect on dog problem-solving skills. 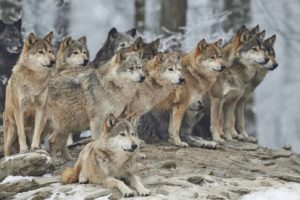 Astonishingly, 8 out of 10 wolves successfully got the treat, while just 1 in 20 domestic dogs managed to do so in the same test.

One such study was conducted by animal behavior researcher Monique Udell of Oregon State University. During the experiment, individual dogs and wolves were presented with a plastic food container and were expected to remove the lid to retrieve the tasty reward inside.

Astonishingly, 8 out of 10 wolves successfully got the treat, while just 1 in 20 domestic dogs managed to do so in the same test.

Interestingly, however, puppies were successful more often than adult dogs, indicating that potentially human training may have an influence on the dogs’ behavior rather than them intrinsically lacking the dog problem-solving skills to open the container.

Wolves also seem better at understanding cause and effect relationships. .

Wolves have an intrinsic ability to find food

A recent study conducted by Radboud University’s Michelle Lampe highlighted that wolves, distinct from their close domesticated relative, appear to have an intrinsic ability for making observations of where food was concealed.

This suggests that the process of domestication may have changed dogs’ cognitive ability, or at least their motivation to act alone. This makes sense of course, since wolves live in the wild and are isolated from humans. To survive, they have to use problem-solving skills such as in hunting in order to survive.

While their domestic cousins, raised by humans from puppyhood, have no real motivation or need to be independent because their owners meet their needs.

Another important consideration is selective breeding. For generations, breeders have been choosing mates based on traits that have nothing to do with competence in the wild, which potentially compounds the issue even further.

Are wolves smarter than dogs?

You may reach the understandable conclusion that these studies show dogs aren’t as smart or that their intelligence is inferior to wolves, yet it isn’t that straightforward. In reality, there could be a variety of reasons for these behavioral differences unrelated to intelligence.

Clive Wynne, a leading expert in the field based at Arizona State University in Tempe, postulates that from the results of some studies wolves are practical problem solvers, while domestic canines are social problem solvers.

Essentially this means that domestic dogs may be raised in an environment that alters their natural behaviors.

For instance, in a human environment, dogs are trained to be obedient and soon learn that certain behaviors may cause aggression or discipline from their owners. For instance, if a dog tries to take food from a human’s plate, the dog would be scolded and either learn not to steal food or understand he needs to be more careful the next time.

Wolves on the other hand have received no such training about eating, so they are unlikely to have modified their behavior.

So while young dogs aren’t intrinsically bad at problem solving, over time they are socialized to be more obedient and cautious around food.

Of course, the fact domestic dogs have developed cooperation traits is a major reason they have become such sought after human companions. In fact, dogs are the only animals to understand a human finger point and are able to pick up on a variety of human signals.

It’s also important to remember domesticated dogs and modern wolves aren’t directly related, so making comparisons between their characteristics and behavior isn’t always reliable. Especially when you consider that their common ancestor is thought to have roamed Earth as long as 36,000 years ago.

It seems that the studies make it clear that domestic dogs appear to suppress their inherent problem-solving abilities  in favor of remaining obedient to please their owners.

This was made especially clear in a study repeated by Udell, which showed that when their owners encouraged them, the dogs were more willing to take the food from the container.

Since we know dogs are social problem solvers, rather than adaptive problem solvers like wolves, how can we help dogs become better at solving problems?

The research highlights that in order to solve problems, unlike wolves, dogs will not act independently and are less likely to adapt to a new situation without encouragement. Wolves will persist in their quest to get the food, while dogs will instead make eye contact and look for help from their owners.

So by responding to your dog with encouraging body language, social cues and appropriate rewards for being obedient, the dog is more likely to succeed.

Another important misconception is that like wolves, dogs are cooperative and work together to solve a task.

But the evidence indicates that this isn’t the case. Dogs view it as a hierarchical relationship, with the owner as the leader of the pack. The truth is dogs have been bred to be obedient, rather than cooperative, which is why they seek their owner’s approval, which is a very important thing to note when training your dog.

Carl Green is a dog owner, wildlife enthusiast and blogger who’s other works can be found on AnimalMentor. If he’s not out walking his dogs, pruning his garden or tending his vegetable patch, he can be found writing about wildlife, animals and pets.