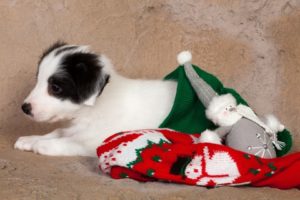 I’ve been given many gifts over the years that, although very thoughtful of the giver, were utterly unsuitable for me or my lifestyle.

A subscription to TV guide, when I didn’t own a television set. Electronic gadgets that blink, whir, and tell you Very Important Things. What, I have no idea. I’m clueless when it comes to that stuff. A gift certificate to a sushi restaurant. (People don’t eat that stuff, do they?). And fuzzy slippers. I liked the fuzzy slippers. I thought that they were really cute with their little bunny faces. But, wear them? No.

The nice thing about all that stuff was that it was effortless to give away what I didn’t want. It was harmless.

Not so when the gift is a living, breathing, creature. When dogs and cats, puppies and kittens are given as gifts, it is very difficult to re-gift or otherwise dispose of unwanted responsibility. Given that the pet is a gift, the recipient may keep the pet unwillingly.

Picking an animal as a companion is a very personal thing. No one should ever assume that they “know best” when it comes to with whom that person wants to spend the next 10 or 15 years. It would never occur to someone to pick out someone’s new boyfriend or girlfriend, tie a ribbon around their neck and say, “there you go!”

But yet, that’s the level of personal choice that the person is interfering with when an animal is given as a gift.

The exception, of course, is when parents pick out pets for their children. That is fine, and it is the parents who need to make those kinds of choices.

But when it comes to adults, please let people make their own choices. Does the person want an animal in the first place? A cat? A puppy? What kind? There are over 200 breeds of dogs readily available to buyers – and those are just the purebreds.

How is anyone supposed to know what someone else would want? A male? A female? Small? Large? Even if someone knows that the recipient wants a black lab female from Snoopy’s litter down the street – let them pick the puppy themselves. Personalities are different. Puppies will react differently to different people. People want different things.

I could give dozens of examples of why giving pets as gifts is a bad idea. But I have a limited amount of space in my column. So, please, just trust me, don’t do it.

Instead, give a book about the breed, a training book, a video — anything but the real thing. A donation to an animal shelter in the recipient’s name is an excellent gift. So is a gift certificate to a puppy or dog training class. Be creative.

Give the best gift you could give – give the prospective new pet owner the opportunity to choose for him or herself.

Terry Jester is a nationally recognized expert on companion animal behavior. She is regarded by The Humane Society of the United States as being, “Humane and effective in dealing with problem pets and their owners.”