Lyme disease is a zoonotic, bacterial, vector borne disease of the Borrelia burgdorferi group. It got its name from the towns of Lyme and Old Lyme, Connecticut, because in 1975, numerous cases with similar symptoms suddenly emerged in that region.

In 1982, the bacterium was isolated and named. It was also recognized to be transmitted when the bacteria found in the saliva of an infected blood sucking insect, such as nymph and/or adult deer ticks, fleas, and lice, is injected into a host, while the parasite is feeding. 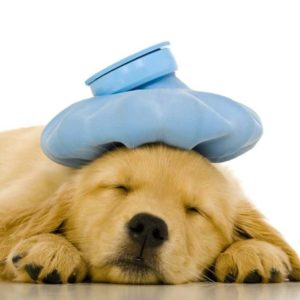 It causes painful inflammation in one or more of your dog’s joints. It can be reoccurring.

Even though the disease has expanded worldwide, in the United States, the Atlantic Coast, Northern Midwestern states and the Pacific Coast are where it is most prevalent.

Some believe the seriousness of the disease can be reduced, or avoided, if the tick is extracted within the first 50 hours of affixing to the host. That’s why it is so important to regularly check your dog. Run your hands over their entire body to feel for, and remove ticks before they attach and start feeding.

All dogs could be potential candidates of Lyme disease. However, young, senior and dogs with suppressed immune systems are more vulnerable.

Additional complications, although not common, are the risks of pulmonary, cardiac, renal, and neurological problems. Kidney failure is rare, but sometimes found in Bernese Mountain Dogs, Labrador Retrievers, and Golden Retrievers, suffering from severe or prolonged cases.

Signs & Symptoms
The sooner there is a diagnosis and it is treated with antibiotics, the greater the likelihood of minimizing or eliminating the debilitating effects of the disease. The longer the symptoms are ignored or are left untreated, the greater the possibility of cardiac, neurological, pulmonary, renal problems.

The most common early signs and symptoms of Lyme Disease in dogs include, fever, breathing difficulties, depression, bull’s-eye rash, lack of appetite, fatigue, sensitive to touch, arched back, swollen lymph nodes nearest the site of the bite, painful joints, stiff walking and lameness.

Diagnosis
Your veterinarian will review your dog’s medical history, perform a physical, concentrating on the site of the bite, and order a complete blood profile, and urinalysis. They may also suggest x-rays of the infected joints. They may also draw and test fluids from the inflamed joints.

There are a group of tests known as the SNAP Tests. They are accurate, can check for other parasitic problems too. Your veterinarian can perform these tests, in their office, with immediate results.

Treatment
Unless your dog’s case is extremely severe, he or she will be treated with antibiotics as an out-patient. Treatment commonly lasts 3-4 weeks. Re-occurrences can happen, so be mindful and continue to monitor your dog.

Prevention
Avoid wooded areas and fields of tall grass, as much as possible.

You can find over-the-counter products, such as collars, spot-on, and topical treatments for repelling and killing ticks.

Although not recommended for all dogs, there are vaccines available to help prevent disease.. Speak to your veterinarian, to see if using a vaccine would put your dog at any risk. Two to four weeks after initial vaccination, immunization would be followed up by a booster shot. Many veterinarians recommend annual booster shots, especial for dogs that go regularly go camping, attend sporting events and/or go hunting in fields or wooded areas, known for the possibility of tick infestation.

Manually inspecting your dog following field trips to tick infested areas is strongly recommended. Preventing, finding, and destroying a tick before it has a chance to infect your dog is always the best option.

Bottom line: By being informed and perceptive, you will do your dog a great service, and spare them unnecessary pain.