Use a RC car to entertain your dog

Those of us who were lucky enough to grow up with a puppy at our side understand the powerful bond between a dog and a child. For kids, it’s like growing up with your best friend, and I like to think this is a pleasant experience for dogs as well.

While not all dogs are family-friendly, they all have a mushy, friendly side and most of them get along with kids. Mostly because they like the same things: running around outside and playing. But what happens when they get bored? Dogs usually turn to destructive behavior like aggressive chewing, and kids are most likely to get busy in areas where they’re not allowed (for their own good).

So, in the best interest of both, I recommend getting them a toy that will be interesting and fun. The best choice that comes to mind is a cool RC car that can be chased by Fido and driven by Junior.

But not every car would be fit for such an important task so let’s take a look at three of the most durable and attractive designs on the market (that you can afford). 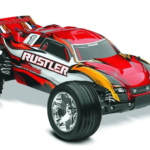 This good-looking RC car will only set you back about $200 but it is a lot of fun to drive and it’s big enough (1/10 scale) to withstand your dog’s behavior as well.

According to the guys at RC rank, the Rustler is one of the most popular cars on the market right now for people who want to engage in competitions (such as car racing).  This means the car is fast (35+mph) and it will be just the right thing to keep Fido interested in chasing.

It is also waterproof so Junior can drive it through puddles and all sorts of terrain. I honestly think this is a great car to keep rambunctious kids and dogs busy and playing outside. 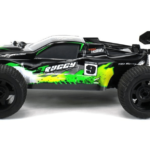 It’s half the price of the Rustler, but it’s just as much fun to drive! Still, it is a bit slower (15mph) but it has 4 wheel independent suspension so it will go through or over any type of obstacle.

The shell is designed of ABS plastic, but the car is big (1/10 scale) so Fido will have a tough time picking it up in his mouth. Also, the low ride and the big tires make it stable and pretty difficult to knock down. Overall, this RC car is a great toy for a child and a fantastic thing to chase for a dog. Even better, the shell doesn’t have any parts that will come off so Fido is safe from accidentally swallowing anything from the car’s body. 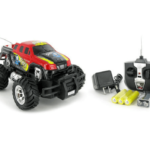 If the first two options were mostly designed to be chased by large dogs, this little one is great for smaller guys. It is the miniature version of a monster truck (1/24 scale), with big rubber tires that take it through all sorts of rough terrain.

It is fast enough for a small dog and it’s not loud so they’ll get scared. I don’t recommend it for a larger dog as it’s easy to chew and some parts may even be swallowed. But, the durable plastic body will easily resist the bumps from a small breed dog with a small mouth.

The mini truck is a lot of fun to drive but you have to consider its size before you start a race on the ground – big obstacles are a problem so organize accordingly.

Jen Danrik is a dog lover and a huge geek. During the weekend she loves to go to dog parks and play as much as she can with her German Shepherd.