Every dog owner has opinions on small dogs vs big dogs and which dog breeds are the yappiest, cuddliest and meanest.

No matter which side of the fence you’re on, small dog vs big dog — we love them all.

So, here’s some information and about various types of dogs. Remember each dog is as unique as its owner.

It’s tough being a little guy or gal in a dog-eat-dog world.

From a small dog’s point of view, everything can look big and scary. So if they are yapping away at other dogs or people, they might be trying to say, “Hey, look at me” to prove they are strong and capable. They will not be ignored!

In nature, it’s common to see finches attack eagles and crows, or cougars chase off bears from kills. Even little fish are fierce defenders. A BBC article cites a study where researchers found that smaller fish called desert gobies were quick to attack and with more intensity than the larger males when it came to defending their nests. 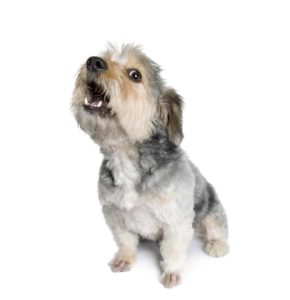 As for dogs, another study in the same article found that dogs closer to the ground had higher levels of aggression, food-begging, urine-marking, attention-seeking and attachment behaviors.

If you believe in the Napoleon Complex, which is characterized by aggressive human behavior to compensate for being smaller than others, it seems safe to assume that dogs take on similar behaviors. However, this may not necessarily be the case for canines — or humans for that matter.

More research needs to be done in dogs to determine that small dogs are undoubtedly yappier than big dogs.

Of course, this topic is always up for debate and often we base our opinions on real-life experience.

When the Yorkie down the street goes crazy every time you walk by with your calmer, larger dog, it’s natural to assume it’s just in a Yorkie’s nature to go ape.

If you’re struggling with a small dog that barks incessantly, consider using the best bark collar for small dogs to help break that habit. 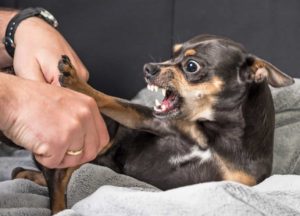 Every year, about 4.5 million dog bites occur in the U.S., according to the CDC.

If there are 326 million Americans and 78 million dogs, that means a dog bites one out of every 72 people.

Also, at least 6,000 postal carriers a year are attacked by dogs. That’s a lot of biting.

Big dogs have a stronger bite. The jaws of a Doberman pinscher, German shepherd, pit bull and Rottweiler have more power behind their jaws than a tiny dog. Plus, big dog bites are reported more often than small dog bites.

Dogs tend to bite because they are scared, threatened, stressed, protective, possessive, sick, startled or playing. It’s up to you to socialize your dog at a young age so they feel comfortable in a variety of settings and will, therefore, be less likely.

As a good dog owner, it’s your duty to both control and understand your dog. Learn about how leashing, approaching other dogs, training, spaying or neutering, and exercising your dog important when it comes to preventing dog bites. If your dog bites someone, or if you or your dog are bitten, it’s important to consult with a dog bite lawyer to ensure you understand your responsibilities and rights

Breeds and individual personalities have a lot to do with whether a dog is friendly and cuddly. When you think of friendly, likable dogs, what breed comes to mind first?

A Labrador retriever? For nearly 30 years, labs have topped the American Kennel Club’s annual list of most popular dog breed. Labs are great family dogs and they’re always ready to play, please, retrieve balls and get lots of petting and cuddles.

In addition to labs, golden retrievers, cavalier King Charles spaniels and American pit bulls are all friendly dogs. Each individual dog’s disposition, of course, depends on the dog and how he was raised.

Some dogs love to cuddle in bed, and others wouldn’t be caught dead snuggling under the sheets (or at least their owners aren’t having it). Some people consider bedtime a good opportunity to bond with their best buddy and doing so even helps some owners sleep better at night.

Dogs sleeping with their owners isn’t a new thing. Kings in the Middle Ages slept with their hunting dogs for warmth.

Not all affectionate dogs like to sleep with their owners. 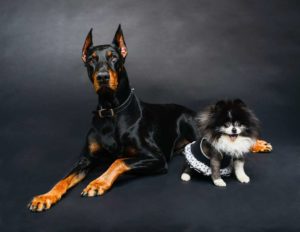 Huskies, for example, were bred to work as sled dogs and hunting companions. They need lots of exercise and mental stimulation in order to be happy.

Huskies tend to be more independent in search of their social ranking, kind of like wolves. They may challenge you but they need to know you are the pack leader.

One thing is clear across the board: Humans have a big impact on their dog’s behavior.

How people raise and train their dogs will determine whether you have a calm, confident dog or a nervous dog that’s more likely to snap and bark.

If you treat your tiny dog like a stuffed animal that can do what it wants, then, of course, it will bark and yap, especially if some of those tendencies are innate in their breed. Small dog syndrome will surely set in.

Likewise, not all big dogs bark and bite.

Devin Morrissey prides himself on being a jack of all trades; his career trajectory is more a zigzag than an obvious trend, just the way he likes it. He pops up across the Pacific Northwest, dragging his dog around whenever possible. You can follow him more reliably on Twitter.