Dogs often make ideal pets for folks with an active lifestyle. Walk down any street, and you’ll likely see people walking, running, or even cycling with their dogs. For many people, this is one of the best parts of owning a dog: You’re not only getting a new best friend but a workout partner as well.

Of course, some breeds are more built for extended physical activity than others. Here are 12 of the best active dog breeds that are most suited for a lifestyle with plenty of exercise.

Beagles have the nose, instincts, and body type of hunting dogs. They’re a highly curious and intelligent breed who will likely go totally bananas the minute you take the leash out. Most beagles need at least an hour of moderate exercise (like a brisk walk) per day, paired with some short bursts of cardio like playing fetch. Remember that since they’re bred for hunting, a beagle will often catch a random scent trail and decide to follow its nose, so make sure your beagle’s recall training is on point and keep dog ID tags on their collar all times. 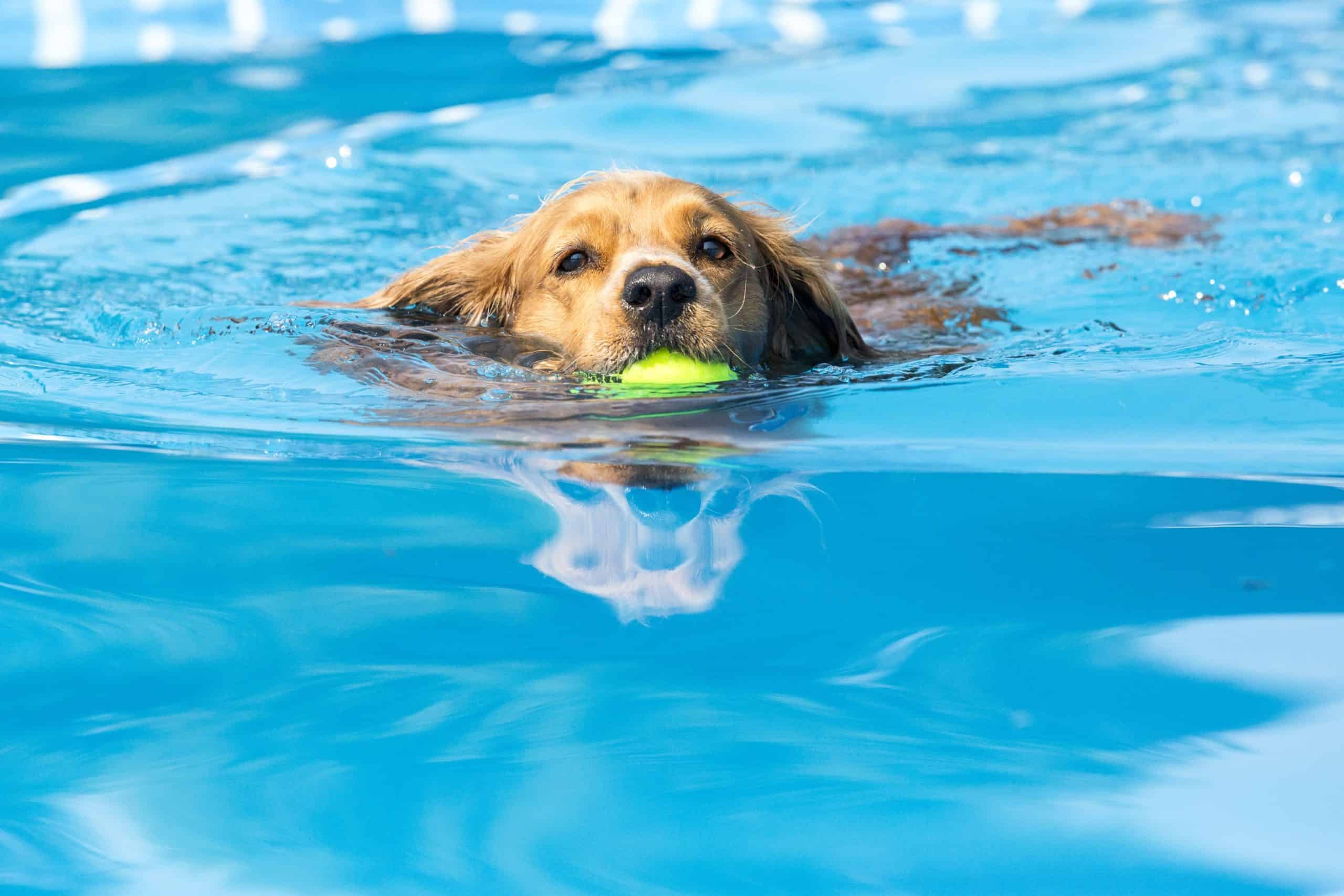 Just about everyone loves a Labrador, and they love just about everyone back. Besides the breed’s well-deserved reputation as a people-pleaser, they’re also tremendously athletic dogs bred to retrieve hunting game. From running to hiking to their original sport of hunting, Labradors will do their best never to let you down. 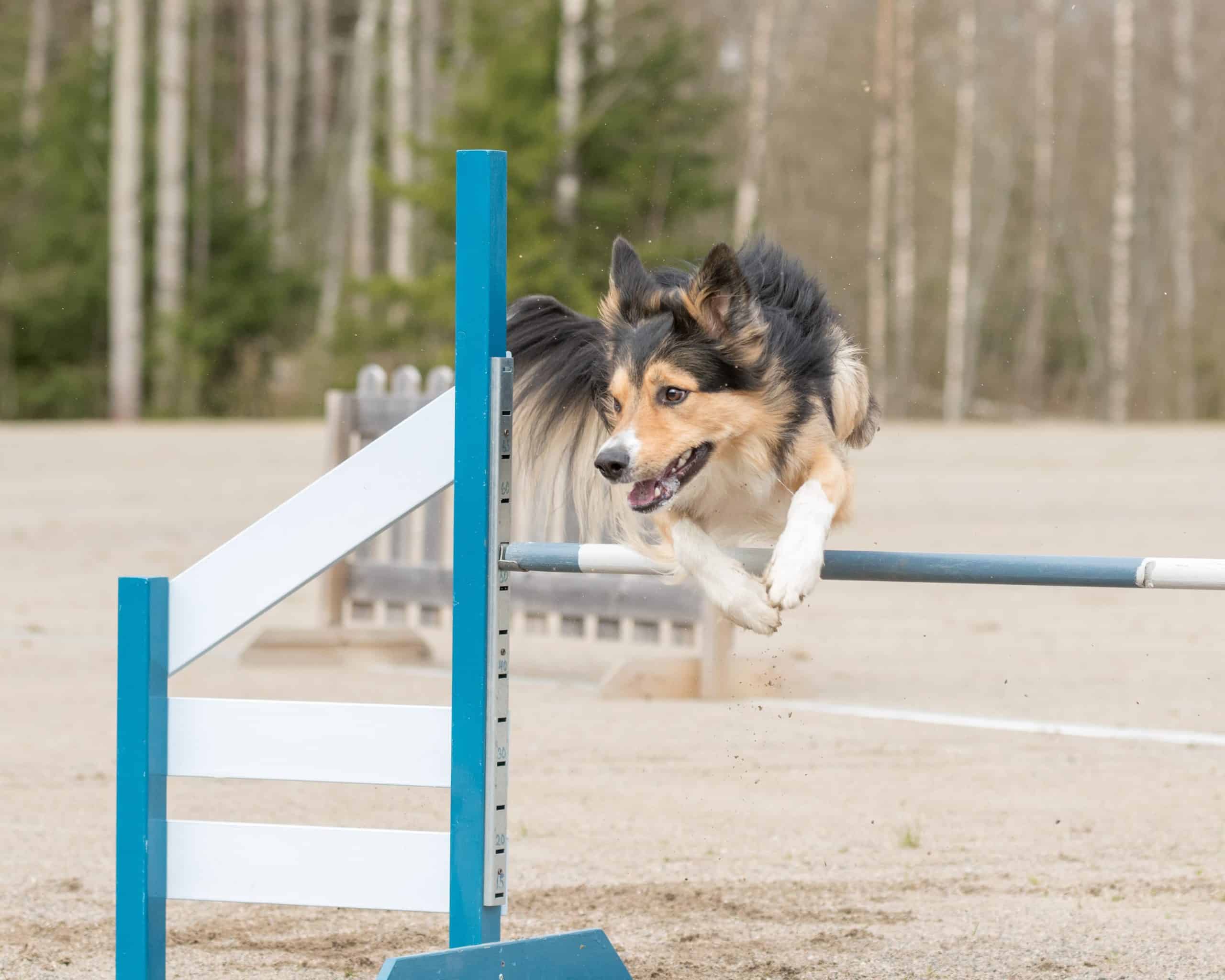 Border collies are herding dogs originally bred in Scotland and England’s borderlands, and their rugged origins are on display in their unbelievable amounts of energy. But border collies don’t just need physical stimulation. They also have keen and inquisitive minds, which means they do best when they also have a mentally stimulating challenge. 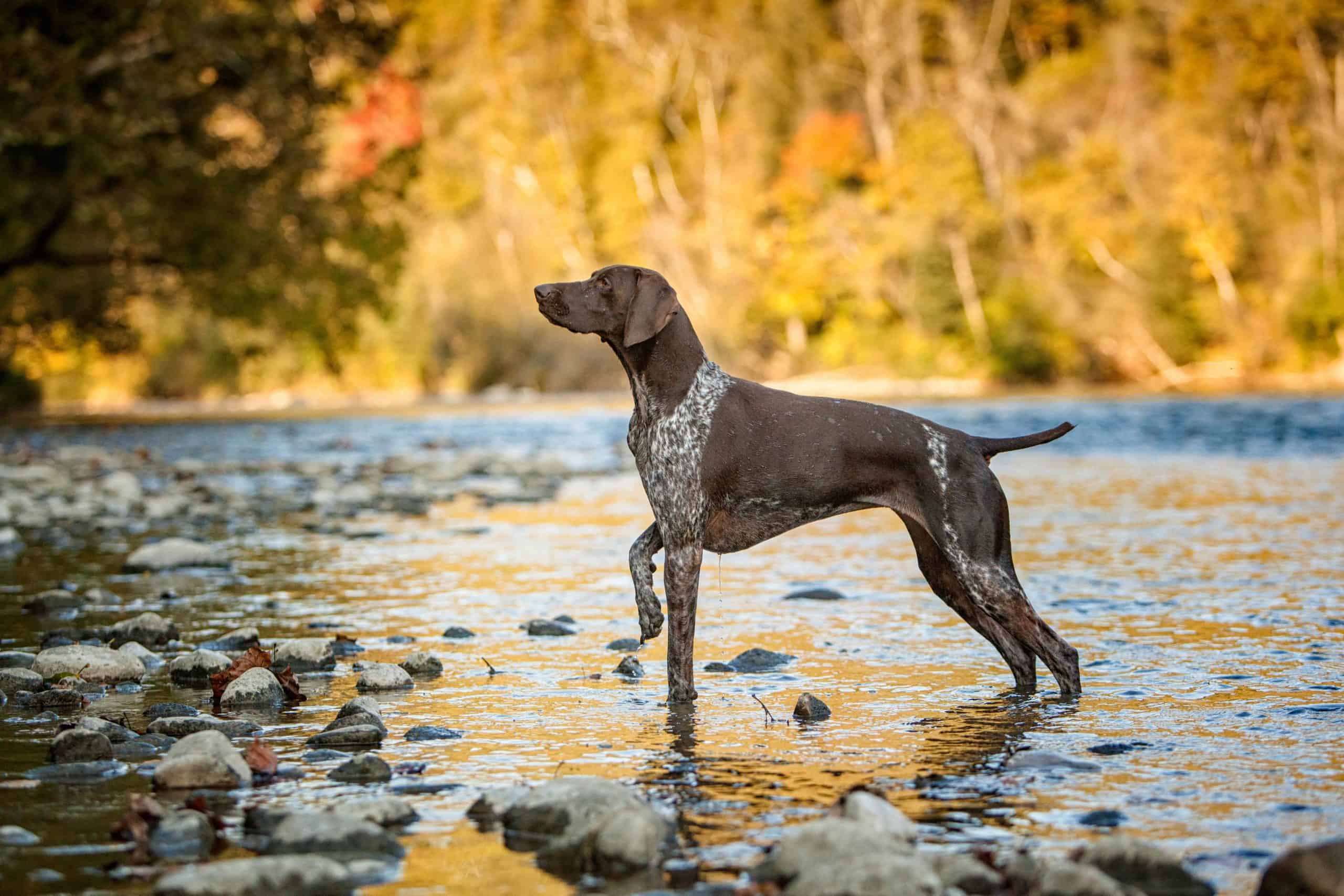 The German shorthaired pointer is another hunting dog that demands physical activity. Playful and highly social, GSPs need activities that help work off their seemingly boundless reserves of energy. Most GSPs enjoy being along for the ride on just about any sport, from swimming to cycling, so long as their exercise is regular. 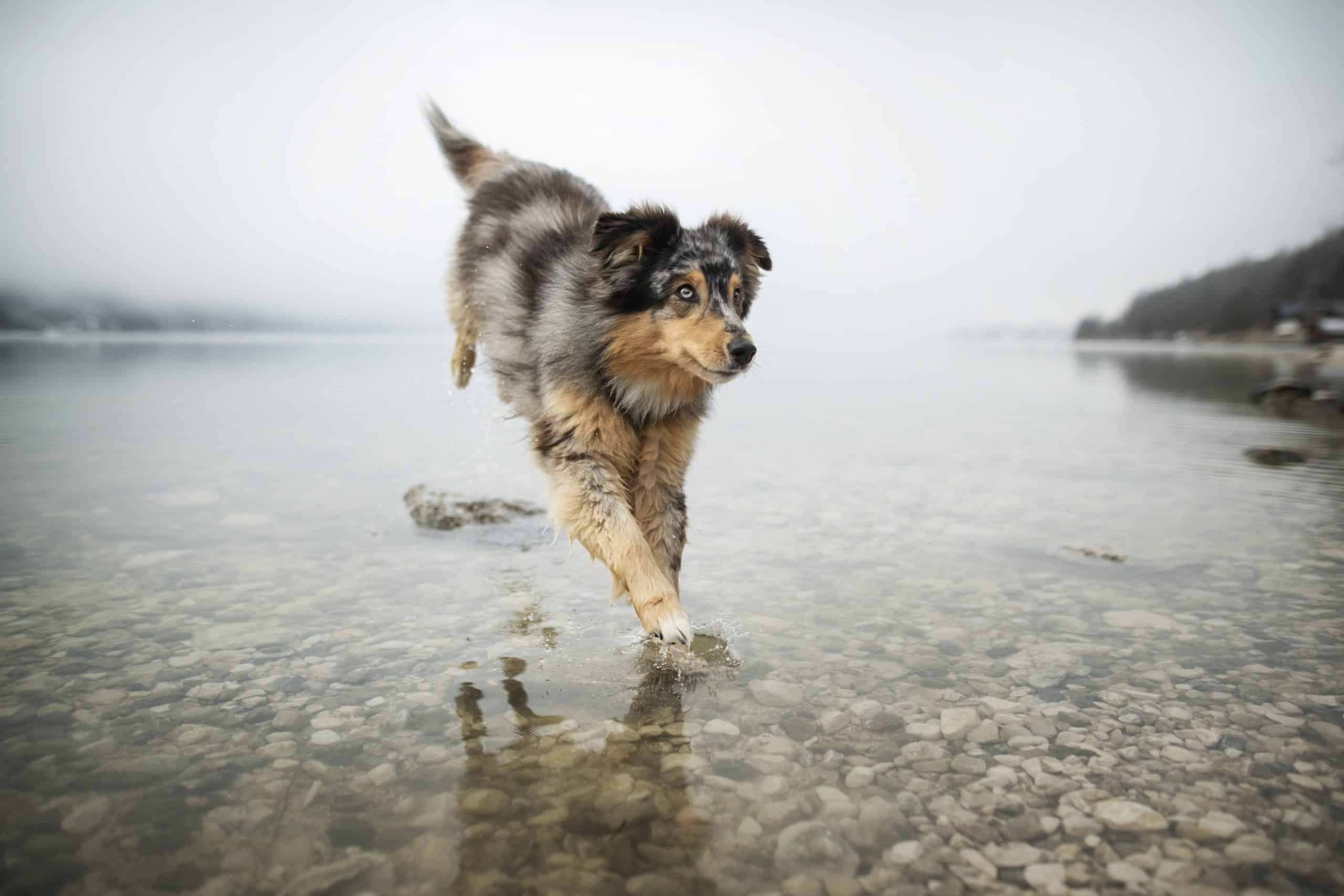 The Aussie, as it’s commonly known, is another incredibly smart and athletic shepherd dog. Like border collies, Aussies learn almost frighteningly quickly and do well when they’re given a challenging mental task. Due to their high intelligence, Aussies are popular dogs for obedience training sports, where you’ll find them happily breezing through one obstacle after another. 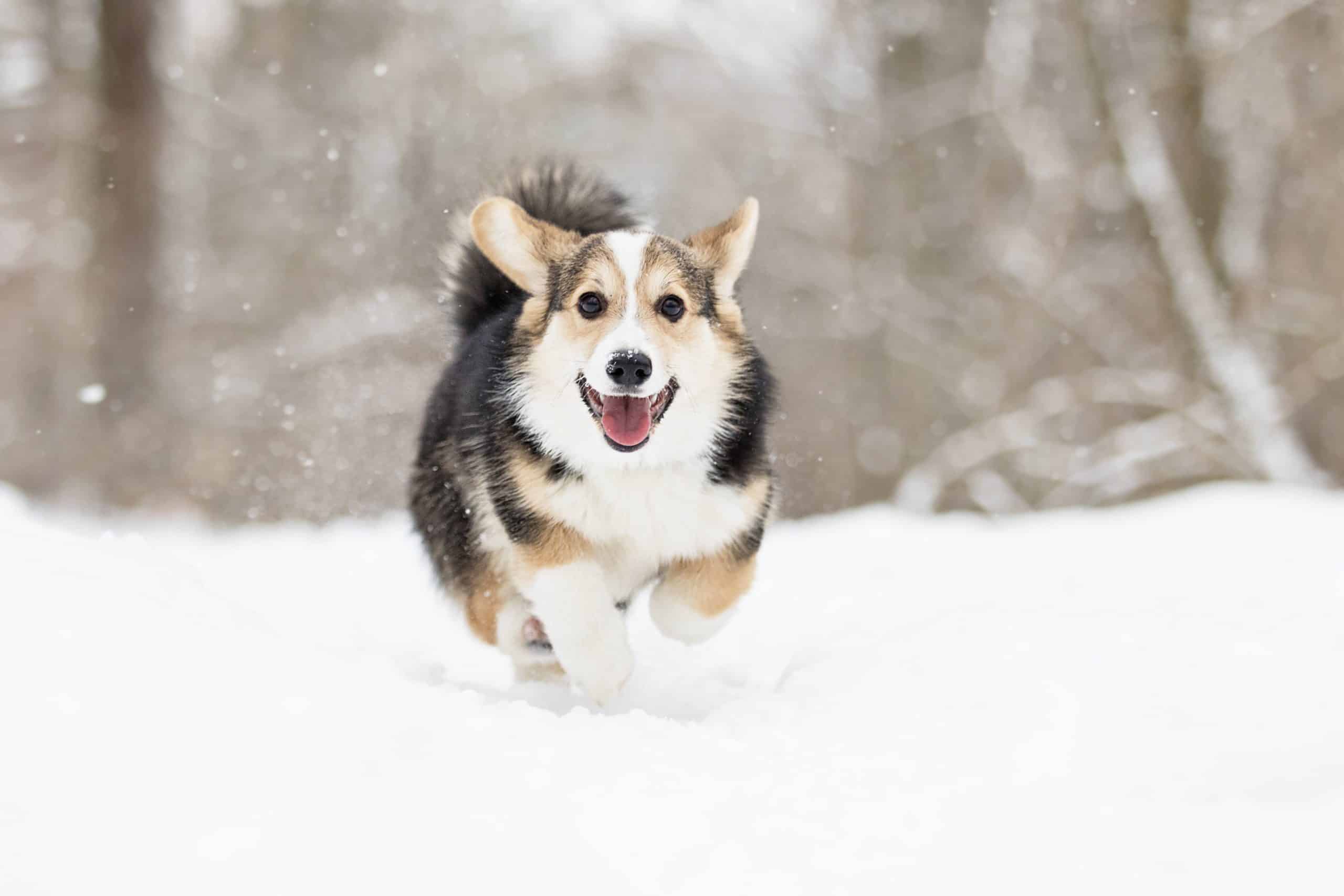 The Welsh corgi often isn’t given its due as an athletic dog, but it’s bred for herding just as much as a border collie or other shepherd dog. A corgi’s legs may be short, but they pack serious muscle, which makes them great sprinters who would play fetch 24 hours a day if they could. However, their stumpiness means they’re not as good for distance runners, backpackers, or cyclists. 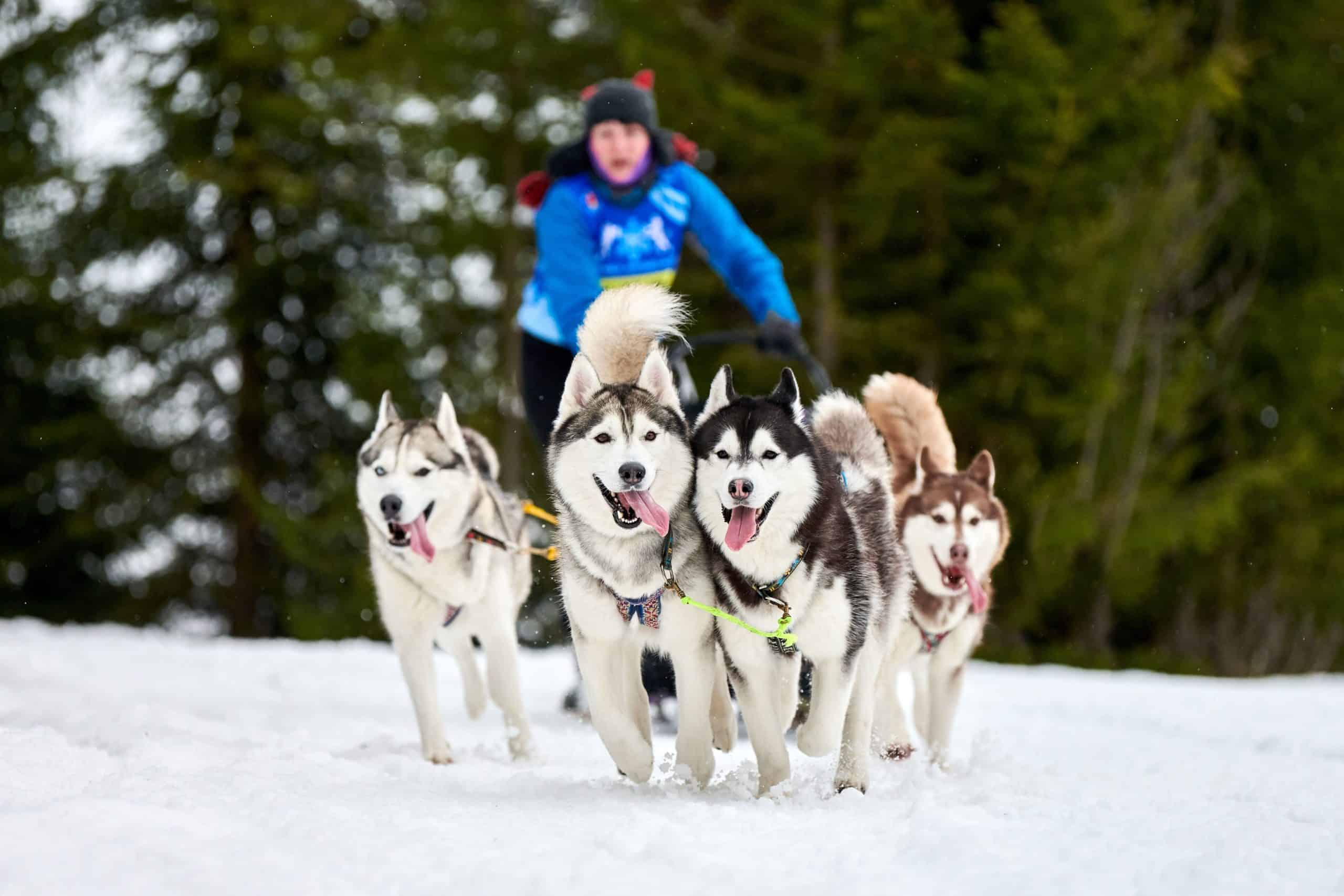 If you’re into cold-weather sports, Siberian huskies make ideal outdoor companions. They’re built for hard work in some of the world’s harshest environments, so sports like hiking and running can be a great fit for a husky in cold weather. Note that a husky isn’t usually a great choice for hot climates. If your pup is exercising in the sweltering sun for most of the year, you’re better off choosing a breed with a shorter coat. 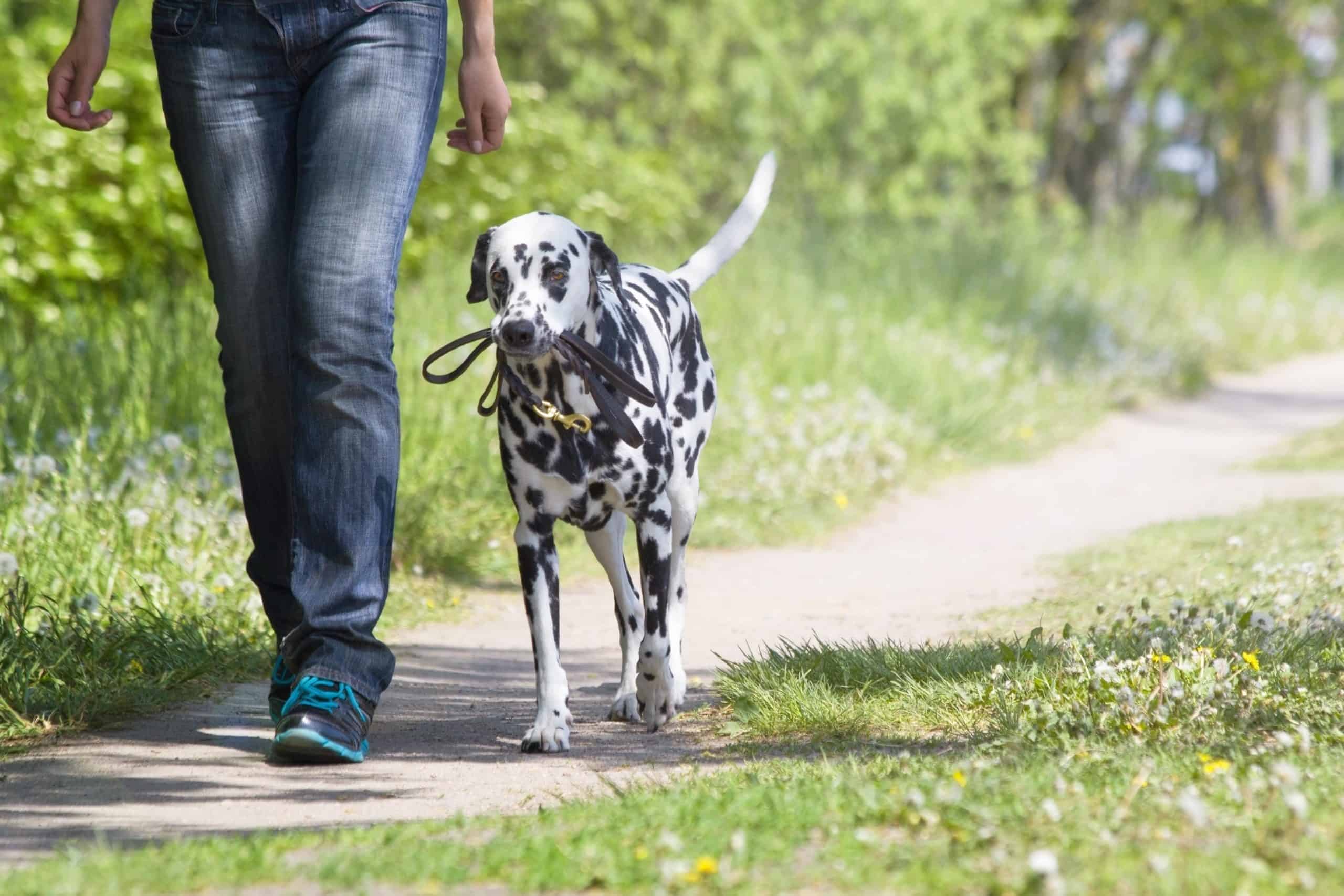 Dalmatians aren’t just uniquely beautiful dogs. They’re also extremely athletic long-distance runners who need vigorous exercise every day. (After all, they were originally used to guard carriages against highwaymen on the roads of Europe.) Trained correctly, a Dalmatian is an ideal dog for someone who wants a companion for running, hiking, or even cycling. Their strong protective instincts can also make them good buddies for long solo hikes.

The Vizsla is a gorgeous and stately-looking dog, originally developed by the Magyar peoples of present-day Hungary, with a golden red-brown coat that makes it nearly unmistakable in a crowd. The Vizsla also happens to have a near-bottomless appetite for exercise, and you shouldn’t adopt one unless you’re prepared to take it for a swim, a run, a hike, or any of the many other activities that these charming dogs enjoy. 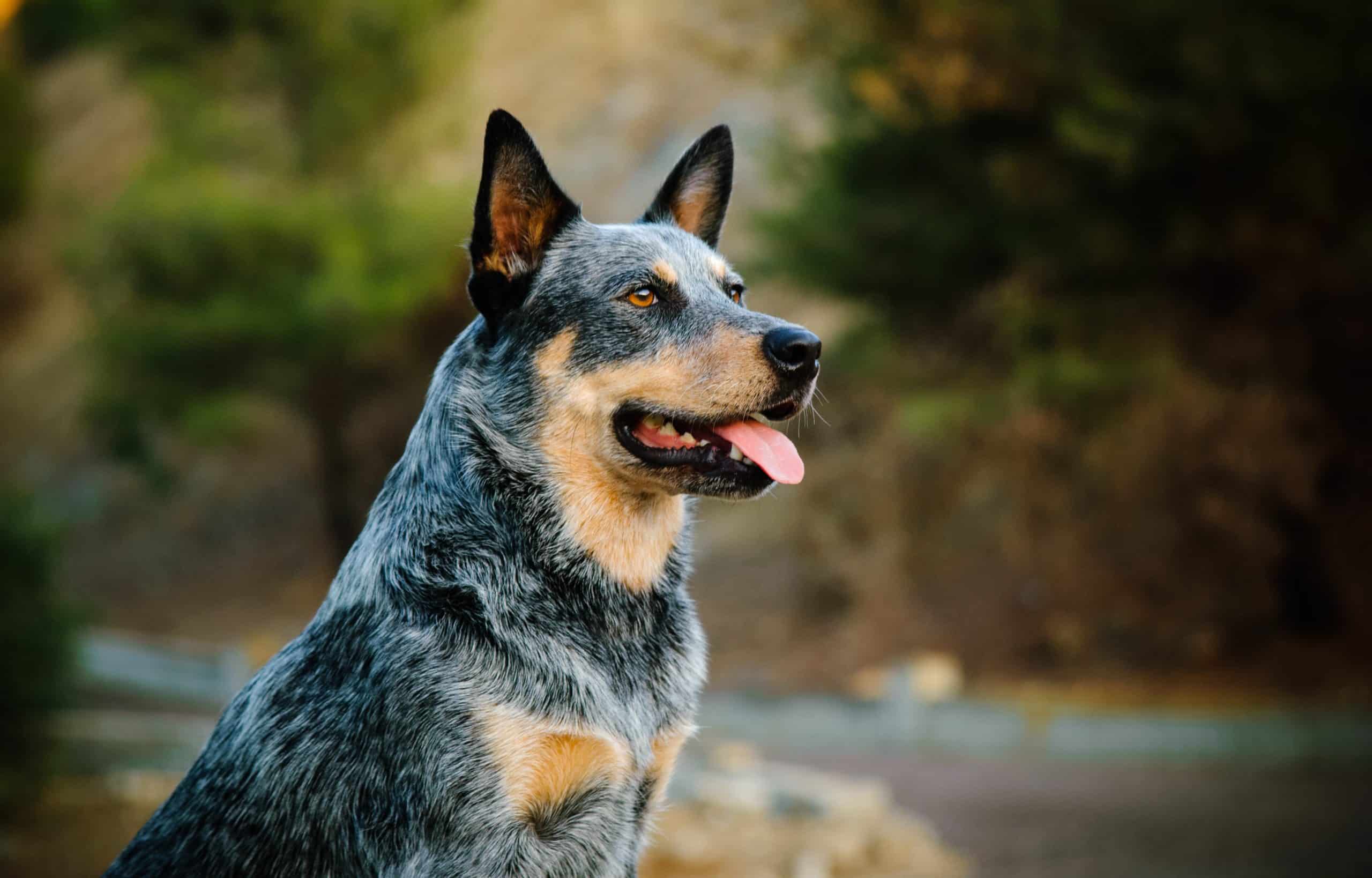 The Australians know how to breed a dog, and Australian cattle dogs are right there alongside Australian shepherds to prove that adage. ACDs have some similarities to shepherds, but they’re stouter and more compact, although they require equal amounts of exercise. The ACD’s pointed ears and snout provide a clue to its origins in the Outback’s wild dingoes, and the breed’s rugged nature also means that ACDs make excellent guard dogs but must be carefully socialized. 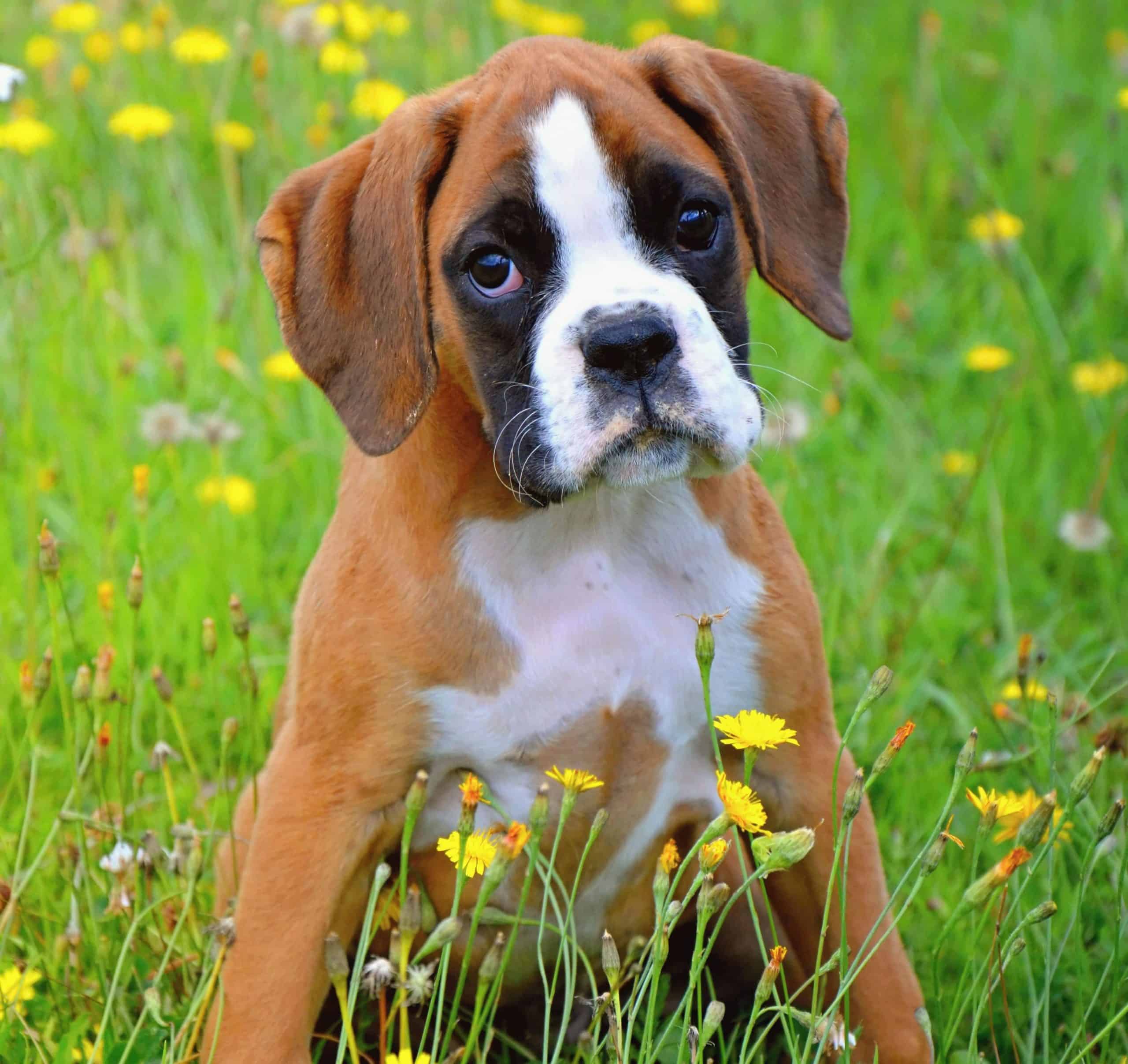 For a boxer, every minute is playtime, so you’d better be ready to bust out the toys several times a day to keep this athletic breed happy. Boxers are known not only for their sporty builds but for their silly and fun-loving personalities, with which they’ve stolen many a heart. Their name is said to come from their constant, playful “sparring” behavior, which they developed during their long years of service as butchers’ assistants controlling cattle on market days. 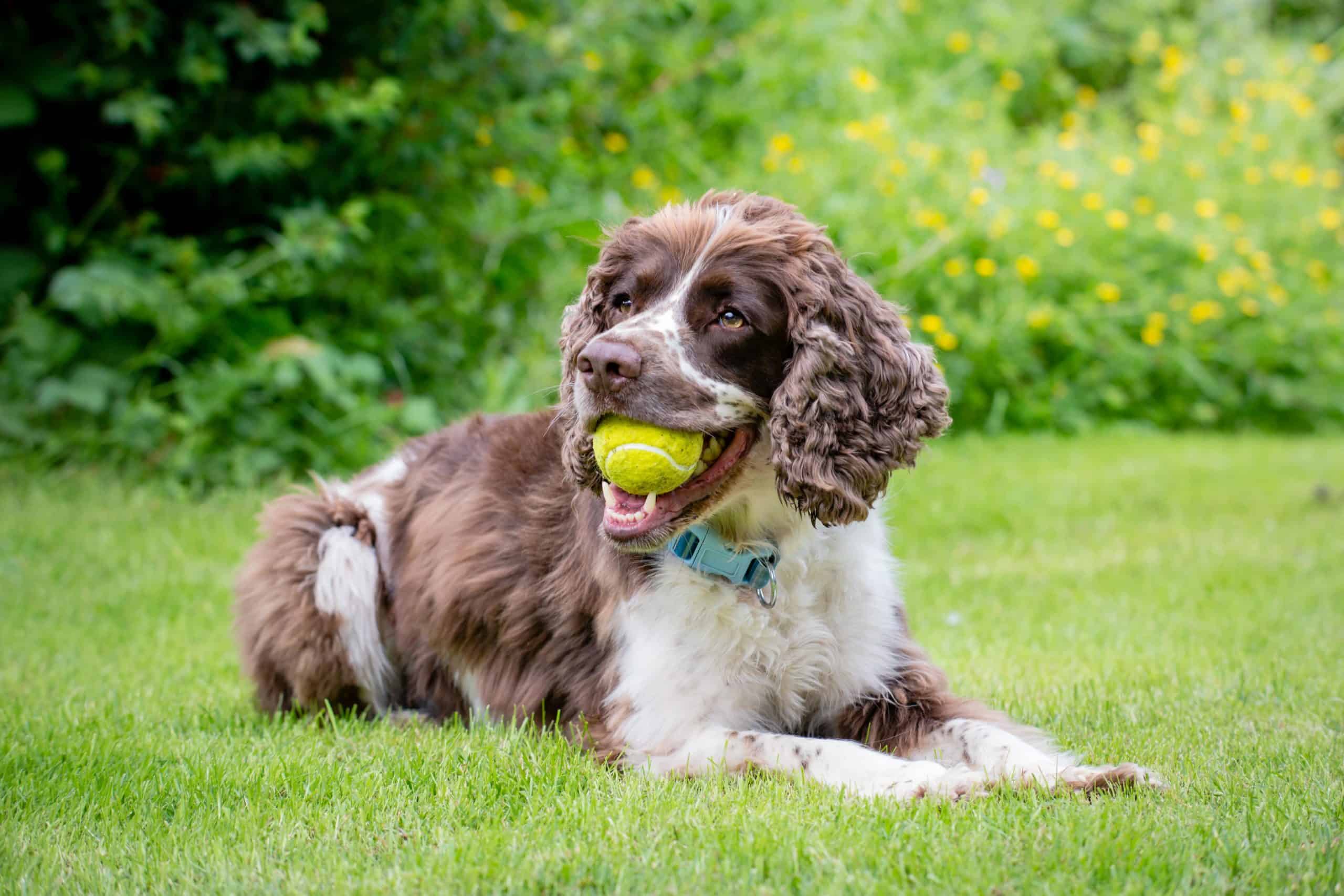 The English springer spaniel is a hunting dog that’s every bit as athletic and energetic as their name would suggest. They’re bred for long hunts and tireless days in the field, so an ESS will typically require at least two hours of daily exercise to stay happy and healthy.

While the dogs we’ve discussed here are among the world’s most athletic breeds, all dogs need daily exercise to prevent obesity and other health issues. Make sure to ask your veterinarian how much exercise you should be giving your dog and which types of exercise are appropriate for them. And, of course, dog owners should remember to take precautions for safer exercise, such as fitting their pooches’ collars with dog ID tags in case they get separated.

Is it better to have two dogs? 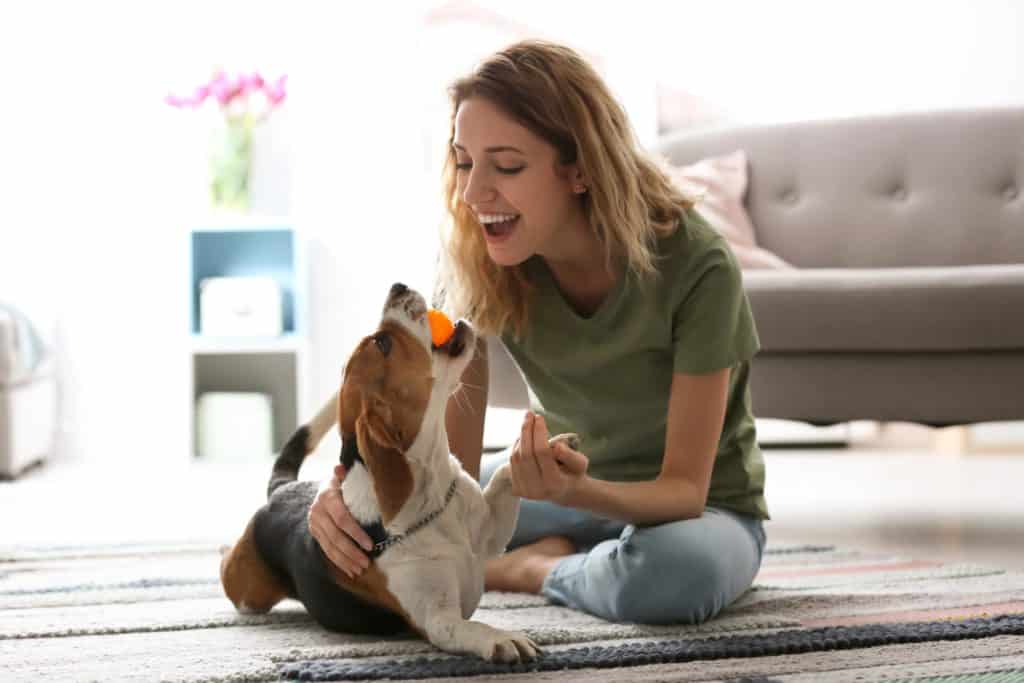