Catahoula Leopard dogs make great companions for those who appreciate rare and striking-looking dogs. Affectionate and hardworking, Catahoulas bond with their owners and make loyal protectors.

If you’re looking for a unique and courageous dog, consider adding a Catahoula Leopard Dog to your family. Though they may seem strong and independent, they benefit from a firm hand during training. With patience and love, your Catahoula will quickly become a cherished family member.

If you’re looking for a hardworking dog who will never fail to amaze you with its energy, the Catahoula Leopard Dog may be your breed. They typically need a strong leader to guide and train them, but once they develop a connection with their humans, they’ll try to show affection in every way possible.

Since this breed does best in bigger places, those with fenced yards or larger houses often adopt them.

Scroll down to learn more about this incredible breed.

The Catahoula’s rich history originated in Louisiana, near Catahoula Lake. This breed is believed to be a product of breeding Greyhounds, Mastiffs, and Bloodhounds.

This breed was initially used for herding and rounding up wild hogs. Over time, the Catahoula Leopard Dog became its official name. 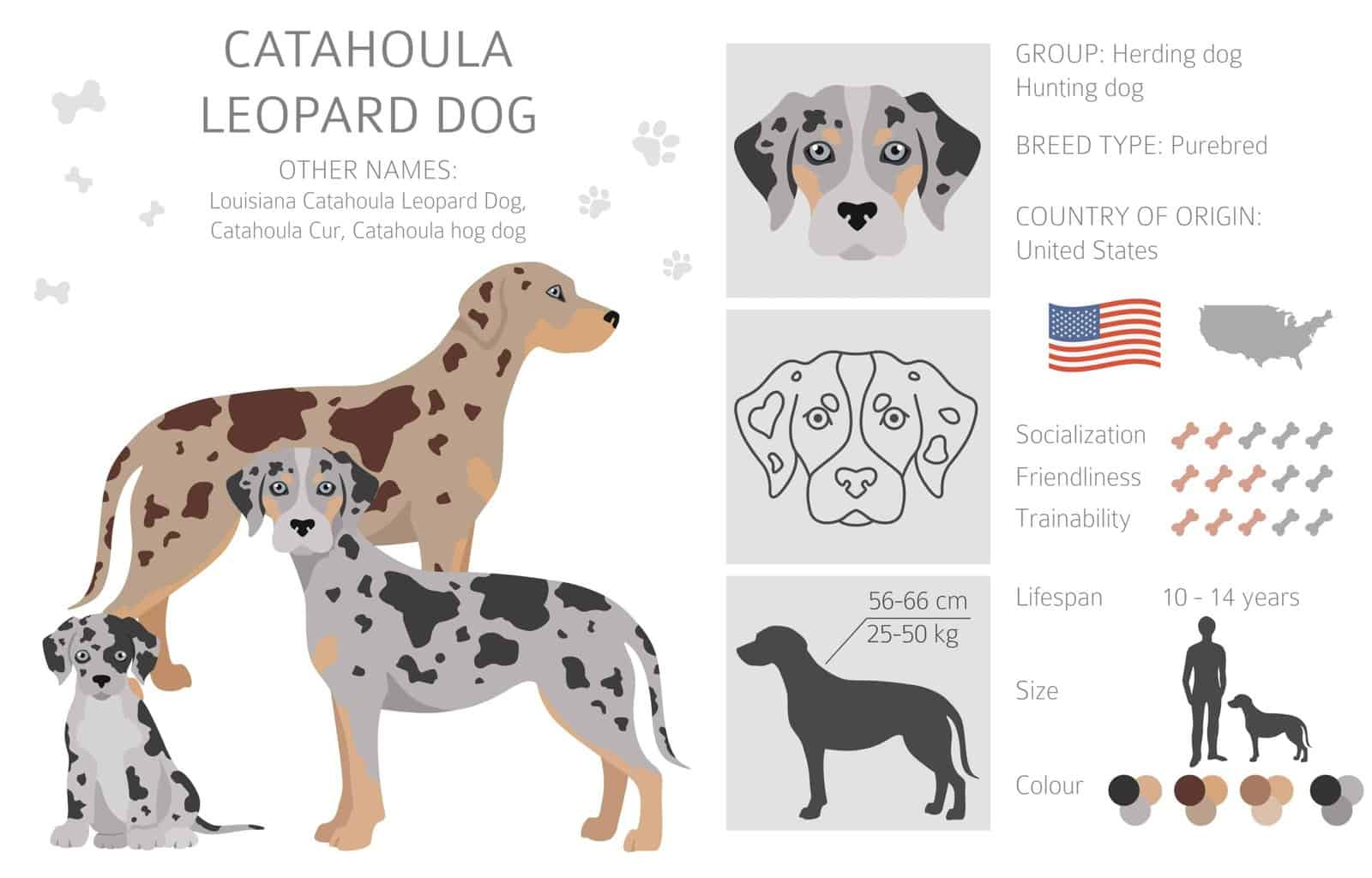 The Catahoula may look intimidating at first glance, but don’t let its muscular appearance fool you — this breed is calm and protective.

This dog has short to medium-length hair that lies close to the body. The single coat can have a texture that ranges from coarse to smooth.

Since this breed doesn’t have long fur, it only requires occasional grooming. You can brush its hair to help control shedding and keep its coat looking shiny and clean.

In addition, the Catahoula has a broad skull with perfect cheekbones. It also has a long snout with a normal bite.

This medium-large breed dog can range from 50 to 95 pounds. With this weight, this breed can reach up to 24 inches.

However, many people avoid adopting a merle-colored Catahoula Leopard Dog as they are more prone to deafness. Another unique feature of this breed is its eye color — each dog has eyes of a different color.

Catahoula Leopard Dogs make great pets for active families. They are loyal and affectionate but can also be severe and intense.

They will get along well with other animals and people if you socialize them early. Just be aware that they may show aggression towards dogs of the same sex.

Caring for your dog

Depending on your Catahoula Leopard Dog’s size, age, and build, you’ll need to adjust the amount of food you give them. As a general guide, 3 3/8 to 5 1/8 cups per day should be enough to keep your pup happy and healthy.

The dogs are hardy and typically live for 10 to 14 years, though their lifespans can be affected by factors such as living conditions, training, and diet.

By giving your dog quality food, regular training, and a loving home, you can help them enjoy a long and healthy life.

The healthy breed is generally healthy but can develop health complications can’t develop. Some dogs lose their hearing or develop canine hip dysplasia.

This breed is likely to develop deafness due to its gene for merle coloration. This gene is linked with deafness and can make a puppy lose its hearing ability.

The Catahoula Leopard Dog also is likely to develop hip dysplasia. It’s a painful condition where the thigh bone doesn’t fit into the hip joint, causing arthritis and pain.

Bottomline: Should you adopt a Catahoula Leopard Dog?

If you’re undecided about which dog breed is right, consider the Catahoula Leopard Dog.

This breed is courageous and has a strong muscular build, making it ideal for families looking for a loyal and protective companion.

The dogs also are easy to train and don’t require frequent grooming, meaning you’ll save time and money on care.