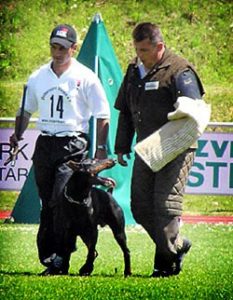 Since the late 1990s, John Soares has consistently placed high in many national level championship competitions, which subsequently qualified him to participate in world championships, representing the United States.

If you’ve ever wished you could have a “CIA trained” dog, you’ll be pleasantly surprised that it’s entirely possible if you follow their lead, so to speak.

Here’s what the CIA does to prepare their own dogs, how they train them, and how you can do the same. Before you dive in though you must be aware that the CIA will not just train any dog. A CIA-trained dog must demonstrate the dire need that it wants to learn, that it needs to learn and that it must learn.

As opposed to just having an obedient pet, the dog is selected based on its response to being trained by a master trainer that will train it on complicated tasks. This has everything to do with the dog’s temperament.

So selecting the right dog with the right genetic traits is as important as the training itself.

Training needs to be an enjoyable process for the dog. This directly affects constancy and reliability. Dogs are animals with pretty simple brains. Yes, they’re smart, but they’re also a lot like children in many ways. You have to make things fun for the dog or it will get really stressed out and become non-compliant. Training should be a fun and enjoyable process for both you and dog. If it’s not, you’ll just get frustrated with the dog’s lack of obedience.

The key is using what your dog finds fun in the training activities – dog’s favorite foods, toys, and your own voice. If you can get the dog to do perform the desired behavior on his or her own, the dog will learn more and faster than if you try to force it on the dog.

What Motivates Your Dog?

Teaching your dog doesn’t have to involve using motivational techniques, but it’s an uphill battle if you don’t. Use toys, treats, jumping up and down, and even using exaggerated excitement in your voice.

CIA trainers often employ the use of food rewards, since dogs are highly sensitive to those kinds of rewards. A high-pitched, and happy voice, also works well. Of course, this can vary by breed. Some CIA training sessions involving shepherds were more successful when toys were used as motivational devices, rather than foods.

When you teach and train your dog, it’s important to remember that a new behavior takes a long time to instill. Watch for slight changes in behavior. Those small changes are the first sign that your dog is starting to really understand what you want him or her to do.

The signals can be small – like a perking up of the ears. Maybe the dog becomes very relaxed during training or more attentive to you when you give commands.

Dogs love to play. And, if you leave little or no time for it, then they will either get bored or frustrated. The energy and enthusiasm you put into the training will affect your dog. Your energy level is transmitted to the dog via the leash. If you’re having a bad day, the dog will know. If you’re feeling stressed, the dog will know that too.

And, dogs, like people, need time to unwind. So, don’t forget to just let the dog be a dog.

The key in training is to induce learning by utilizing what a dog is motivated for toys, nose work, food, our voice etc. Teaching them how to “connect the dots” inductively, using force has no place in learning.

Once your dog learns a new command or behavior, it’s time to test it. Introduce distractions that include things that might tempt the dog to not do what you want him to do. Put obstacles in his way. By doing so, you can determine just how strong the impression is in your dog’s mind. You can see whether more training and discipline is needed.

You can also desensitize the dog to specific distractions and reinforce desired behaviors. If you get stuck at this stage, as many dog owners do, it might help to hire a dog trainer like John Soares K9 Training LLC.

Above all, be consistent. Dogs learn best when you are consistent with your commands, and the training. That means you must build a routine around your dog’s life. He or she should eat at the same time of day, go outside at the same time, go for walks every day, at about the same time, and training should consist of giving the same commands. You can’t switch up commands for variety. That won’t work.

John’s introduction to the Dog World started at the age of 6, through his uncle, who bred and trained hunting dogs. This exposure at a young age led John to start training dogs himself, learning about different breeds, techniques, and theories of training. In the years following his childhood, John became involved in “specialized dog training,” servicing people wanting a highly trained pet or a family guardian. John’s growth in understanding dogs and training led him to change his carrier path, and become a professional dog trainer, competitor, and handler. Since the late 1990s, John Soares has consistently placed high in many national level championship competitions, which subsequently qualified him to participate in world championships, representing the United States. His talent and technique earned him prestigious certifications in Europe, where the dog training profession is controlled and regulated. After living in Europe as a professional dog trainer for 4 years, John moved back to the USA in 2005.