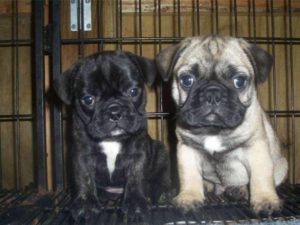 The registered ABA purebreds are composed of five breeds: French Bulldog, Pekingese, plus, three top secret breeds in their gene pool. To protect his standards, and guarantee established results, the breeder who produced the breed is keeping the other three breeds close to his vest! However, it is believed the three are Dachshund, Pug, and Boston Terrier.

The American Bullnese is classified as a non-sporting breed. Its life expectancy is 12-15 years.

The American Bullnese Purebred follows a stringent standard. They are solid, with large heads, large round eyes, folded ears, short legs, long body, and sickle tails. They weigh between 15 and 30 pounds, and stand about 12 inches high. You can safely call them a short dog, as they are shorthaired, short-legged, and short nosed. Owners proudly report their little Bullies are silly, playful, happy, usually calm, easy to train, normally quiet dogs, and are great for any age. They can be stubborn, get chubby, and lazy if you let them. Like many small dogs if allowed, they can develop “small dog syndrome.” Getting your dog into a positive reinforcement, punishment-free Puppy Kindergarten, or obedience class is a suggestion.

They have spurts of energy, that can be comfortably dealt with inside; which makes them a terrific dog for an apartment or condo. After a short workout, they are quite content to chill-out and cuddle with you.

American Bullnese are a healthy breed. The most common health issues are hernia, breathing problems, disk problems, and corneal ulceration. Because they are typically calm, and would rather snuggle than jog, they can pack on the pounds rather quickly. With their long backs and those stumpy, slightly bowed front legs, not to mention, that short nose, brief walks, at least twice a day, is the best way to keep their weight down. As with any brachycepthalic dog, humid, hot days and extremely cold days, can be dangerous, even fatal. Because of that short snout, plan on listening to a lot of snorting and snoring!

The American Bullnese Hybrid
Breeders have experimented with the mix. They have come up with, the American Bullnese Hybrid, which is half French Bulldog and half Pekingese. There is no standard, because there is no guarantee what the hybrid puppy will look like! Some have huge bat ears, curly hair, and/or even a corkscrew tail! Their owners lovingly report they are little clowns, calm, love attention, brave, perfect size for a condo or apartment, and are great with children. As with the ABA Bullnese Purebred, expect to hear a lot of snorting and snoring.

American Bullnese are easy to groom. Shampoo, a brush, and a washcloth are all you will need. Their wrinkled face ought to be washed daily, to keep it clean and prevent the possibility of skin problems. They are not heavy shedders.

Bottom line: The American Bullnese Purebred and the American Bullnese Hybrid are unique, little dogs, with a lot of heart and character. If they sound like a dog you think is perfect for you, do your homework on the breed. Check with shelters and Bullnese rescues. Yours may be patiently waiting there for you. Not only will they appreciate a loving home, you just may be saving their life!