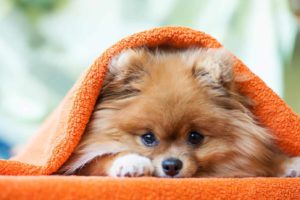 The trend of owning toy dogs has become more popular when celebrities show up in public with their little pooches.

One little breed has become popular with the stars and the list of celebrity Pomeranian owners is long.

The adorable toy dogs are considered big dogs in small bodies. They tend to have a fierce personality and adorable features.

But like other toy breeds, the dogs require special handling and care.

Those costs aren’t daunting to celebrity Pomeranian owners who can easily afford them.

Wondering which celebrities own Pom Poms? Check out this list of celebrity Pomeranian owners.

Paris Hilton is a popular American actress, model, television personality, socialite, and heiress. She is a big fan of Pomeranians and even bought two Pomeranian teacups at $25,000. Such big prices for tiny creatures.

Kelly Osbourne is a celebrity fashion critic and comes from a family of Pom lovers. It is believed that the Osbourne family has over six Pomeranians in their large collection of toy dogs. Kelly rescued two Pom Poms that she named Sid and Story.

Apart from his love for acting and producing movies, Sylvester Stallone is one of the many celebrities who love toy dogs. As a matter of fact, the Rocky star has been seen driving a convertible sports car with his Pomeranian seated in the front seat.

LeAnn Rimes is an acclaimed pop and country music singer. Besides her unwavering love for music, she also loves dogs and owns three Pomeranians; Jude, Raven, and Joey. She also has a German Shepherd, a Boston Terrier, and two Chihuahuas.

Fran Drescher is a renowned author and actress who owns a Pomeranian named Esther. She is close to her dog and even loves to bring the little pooch along for red-carpet events. Drescher also sometimes appears in movie scenes with Esther.

Lisa Vanderpump is a British television personality, actress and philanthropist. She owns one Pomeranian dog she calls Giggy.

Famous for being the ex-sidekick of Paris Hilton, Nicole Richie is an American actress and fashion designer. And just like the hotel heiress, Richie also owns a beautiful Pomeranian. She calls her little furry dog Foxxy.

Underneath his manly and beach body physique is the love for his dogs. David Hasselhoff is not only famous for his iconic role in Baywatch but also for his two Pomeranians, Killer and Jenny.

Gwen Stefani is an American fashion designer, singer, and songwriter. She is known for her stunning wardrobe and trendy style. She also is a proud Pomeranian owner and got her first Pom in 2012. She likes to walk around with her toy dog under her arm.

The sexy actress and mother of two owns an adorable Pom Pom. She’s fond of her dog Lucky and likes to move around with her furry friend.

Keanu Reeves is a Canadian actor and musician who also loves to keep pets. The “Matrix” star owns a Pomeranian dog named Fluffy, but he is seldom seen with his little pooch.