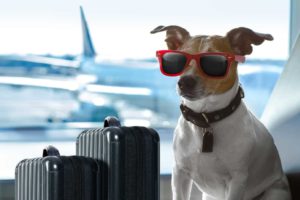 First, a puppy suffocated after a flight attendant insisted the dog’s carrier be placed in an overhead bin during a three-hour flight from Houston to New York.

Then. a family in the process of moving from Oregon to Kansas City, Missouri, arrived at a cargo facility to pick up the family’s 10-year-old German shepherd.

Instead, they were given a Great Dane and learned their dog had been mistakenly shipped to Japan in the Great Dane’s place.

Finally, a United flight from Newark to St. Louis was diverted after the airline learned it had an unauthorized passenger onboard: a dog. The dog was bound for Akron, Ohio, but was mistakenly loaded onto the St. Louis flight, company spokeswoman Natalie Noonan told The Washington Post.

On March 20, United announced it would halt PetSafe reservations while it reviews the service, which lets customers ship pets as cargo. The review, expected to finish by May 1, doesn’t affect pets in the cabin like the French bulldog puppy that died last week.

Although most people prefer to travel by car with their dogs, there are times when you don’t have any other choice than to put your precious pup on a plane.

When that happens, what can you do to ensure dog plane safety?

The ASPCA recommends putting your dog in a well-ventilated carrier that can go under the seat in front of you, but never in an overhead bin.

Other safety tips for traveling with your pet in the cabin:

Air travel can be extremely stressful for your dog, so whenever possible find another way to get from point A to point B. But if you need to fly, follow the safety tips so you’ll both arrive safe and sound.

Sara B. Hansen has spent the past 20-plus years as a professional editor and writer. She’s also the author of The Complete Guide to Cocker Spaniels. She decided to create her dream job by launching Dog’s Best Life. Sara grew up with family dogs, and since she bought her first house, she’s had a furry companion or two to help make it a home. She shares her heart and home with Nutmeg, a Pembroke Welsh Corgi puppy. Her previous dogs: Sydney (September 2008-April 2020), Finley (November 1993-January 2008), and Browning (May 1993-November 2007). You can reach Sara @ [email protected].