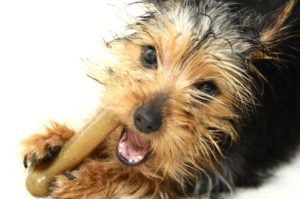 One of the most common calls I get is from people wanting to know how to deal with a destructive dog.

If your dog is more than eight months old and still chewing on everything not nailed to the ceiling, then you don’t have a teething puppy — you may have an anxious dog.

Anxiety in dogs can manifest in many ways, the most common being chewing.

Not content to simply gnaw on his own toys, the anxious dog will steal underwear, slippers, books and the TV remote to satisfy his need to keep busy.

And that’s what it is — he needs to keep busy. His energy level is such that he is unable to relax and he chews in order to relieve his body of excess energy.

The anxious chewer should not be confused with the dog that steals items to play with in order to test the authority of the resident pack leader. The anxious dog isn’t trying to undermine anyone’s authority, he’s just trying to make it through the day. Chewing on things belonging to members of the family is a self-soothing behavior that helps him do that.

Unfortunately, the destructive chewing often leads to punishment, which in turn leads to more anxiety and thus, more chewing.

To stop this cycle the dog needs three things: directed exercise, a safe environment without access to items inappropriate to chew and positive reinforcement for desired behaviors.

An example of directed exercise is the dog retrieving a ball repeatedly. The dog is focused on the ball and pleasing the owner by retrieving it. He doesn’t have to think of anything else or make any decisions. He simply gets the ball and brings it back. His brain gets to relax while his body unwinds.

If you take your dog for a run or to the dog park for exercise, he may not get the same benefit. Constantly having to think, to sniff, preoccupied about marking his territory and cataloging in his mind the scents he collects. When this dog gets home, he may be physically exhausted, but still mentally wound up and needing to chew.

An anxious chewer needs to be kept strictly supervised or confined to an area where inappropriate items to chew are not accessible. A crate is a good example. But the dog should only be confined AFTER he has been given directed exercise.

The anxious dog caught chewing on an inappropriate object should not be punished. Punishment for chewing just leads to more anxiety, which leads to more chewing. Praise for accomplished tasks such as retrieving the ball or performing simple obedience commands should help build confidence and a more mentally balanced dog.

With daily directed exercise, safe confinement when not supervised, and positive reinforcement for completed tasks, the anxious chewer should be well on his way to rehabilitation.