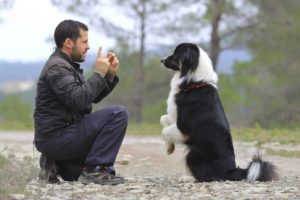 Most people realize that a dog’s hearing is better than a human’s. Speak softly and see how your dog reacts.

Not only can your dog hear frequencies that we can’t hear, but they can hear things before we hear them.

To test your dog’s hearing, just take the average dog of a year and WHISPER, “Want to go for a ride?”

See how well they can hear?

So, why then, when training dogs, are we encouraged to practically SHOUT commands at our dogs? In many dog training classes, books on training dogs, and “expert” advice columns, people say “speak loudly and firmly to the dog.”

Why? Hey, they heard you, they just didn’t want to do it, whatever “it” is. Sit, down, stay, come, whatever.

It cracks me up when I teach a dog training class and several people are bent over their dogs, the owner’s mouth about 12 inches from the dog’s ear, and they’re saying, Sit!, Sit!, Sit! And finally, SIT!, until Gonzo finally sits.

Did he not hear the command? Of course he heard you.

He heard it all along. He just didn’t think he had to do it until the owner’s voice and pitch got to a certain level.

Don’t teach your dog not to respond

Remember, dogs learn through repetition, but NOT repetition of the command. When you REPEATEDLY make them sit, ONLY after they’ve heard the command many, many, times, then they will ONLY sit after they hear the command several times.

Dogs do not understand words, they understand SOUNDS. That is why when you tell your dog to “sit,” he has no idea what you are telling him because you don’t make him sit until you tell him, “SIT!” “Sit” and “SIT!” don’t sound the same to the dog, therefore they can’t possibly be the same word or command.

Speak softly when you give a command

The solution? I tell my students to speak softly to their dogs when giving commands. If the dog doesn’t pay attention, MAKE them pay attention and make them do the command the FIRST time it is given, not the fifth time.

This way, your dog learns to respond to commands when you speak in a conversational tone of voice the first time he is told to do something. Speak firmly, but speak softly, not harshly and loud, and you’ll have a well-behaved, attentive dog that obeys without having to be shouted at.