Approximately 30% of puppies and dogs are distressed, and suffer from physical and behavioral problems during lightning and thunderstorms. Normally, they begin to show signs of anxiousness hours before the storm hits. 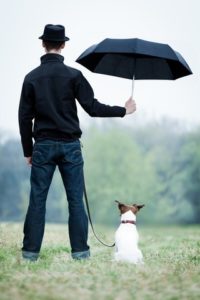 Dogs learn by association. Puppies do not seem to be as affected by storms. Dogs are usually at least a year old, before they show signs of anxiety and distress.

They could be associating our uneasy behavior prior to and during thunderstorms; or, it could be from their own experiences, such as being trapped outside, or home alone during a bad storm.

In order to survive an immediate threat, as with humans under stressful conditions, dogs release cortisol.

Cortisol is a hormone produced by the adrenal gland, and released by the hypothalamus, a part of the brain. It helps us, and our dogs cope with fight or flight situations.

At signs of the next storm, observe your dog. You may notice she appears restless, paces, drools, pants, whines/howls, hides, or clings to you. If arthritic, they will have difficulty getting up, or walking, because of inflammation of their joints.

It is a fact, as static electricity builds, there are dogs that become statically charged. They may want to hide in a bathroom; in the bathtub, or behind the toilet.

Inherently, some dogs seem to know the need to ground his or herself. Don’t be surprised if they want to hide in their crate, a closet or under a bed. Others, feel safer in a more open space, such as a porch or lanai.

Your dog’s senses of smell and hearing are more perceptive ours. They can perceive subtle changes as the barometric pressure drops, before we do.

Watch for signs. You may notice their nose is in the air, as they smell changes in the ozone, caused by lightning still miles away. When lower pressure moves in, it changes the way scents travel; usually lower to the ground.

They can hear thunder before we do. Be careful. The fear of being trapped during a storm could make your dog’s aggression rise or induce a need to bolt.

There are products available, such as pheromone diffusers, vests, medications, and natural calming treats, that can help reduce their anxiety. Some owners report leaving more lights on in the house, and playing a radio or TV on a higher volume, helps to defuse the flashes of lightning, the surprise cracks of thunder, and the sound of rain hitting the roof.

If you’re going out in the storm be sure to protect both your dog and yourself by wearing a rain jacket.

Currently your dog may not be affected by storms. Being familiar with changes their body language and behavior will prepare you, should the phobia develop. Do not baby your dog. That will only reinforce their fear in a negative manner. Remain calm. Be reassuring. Go about doing whatever you normally do. This is one of the hardest behaviors to modify. Sometimes it’s impossible. If you know what to look for, and what to do, you can help your dog survive thunderstorms.