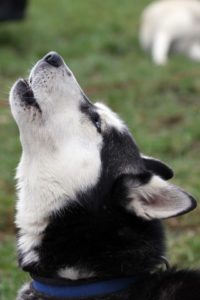 Howling sessions usually do not last long. Unless the howling disturbs you or your neighbors, let him howl.

As you well know, your dog is nothing more than a wolf in your living room. As such, howling is something he is genetically programmed to do, for a few useful canine reasons.

It’s an ancient memory. Most likely he doesn’t know why he’s doing it, but something deep inside is telling him he should.

In the wild, wolves howl to communicate with each other. It’s a way to let each other know how they feel. They also use it to locate each other when separated. And, there are those occasions when it’s nothing more than one big sing-a-long; that’s fun and feels good! Everyone in the pack joins in!

Domesticated dogs have carried on the gene and tradition for 60,000 years.

If your dog’s howl is mournful, most likely he’s outside, by himself, and is feeling darn lonesome. He wants you to come out and play.

He may have heard a passing siren and is letting them know where he is. He’s talking back.

He could have heard other dogs howling in the distance, and just wants to chat. It’s a canine version of a conference call.

Then, there is always the kid next door, learning how to play the clarinet or flute. That weird sound triggers many a dog that would never even think about howling, to chime in and tests their pipes.

If his howling is disturbing, ignore him. Only when he stops, should you bring him inside. You do not want him to learn to associate, “Whenever I howl, they let me inside.”

The same rule holds for barking. When your dog is quiet, reward him and let him inside.

If he is outside alone, give him enough toys and items to keep him busy. Challenge his brain. By keeping him preoccupied, he is less likely to howl. Bored dogs get into trouble!

Bottom Line: Howling sessions usually do not last long. Unless the howling disturbs you or your neighbors, let him howl. Join him. It takes a bit of practice to get it right. Nevertheless, your dog will be patient while you learn. What a terrific way to bond with him! It’s a liberating, silly, fun, time for both of you to share. It’s the call of the wild.