Take your dog on a power walk

The “power walk” is one of the easiest and most beneficial activities you can do with your dog. A “power walk” is a 30 to 45 minute walk where you are in control and your dog is a relaxed follower. 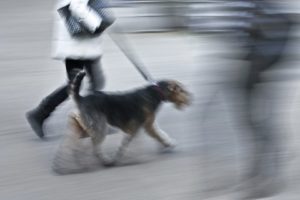 Dogs benefit from regular power walks. But occasional walks with the owner in charge will only confuse the dog and add to his anxiety.

With dogs, it can minimize anxiety, frustration, some forms of aggression and hyperactivity. It can also help with some barking problems and dominance issues.

The power walk does all these things by establishing the owner as Leader and the dog as the follower.

As the follower, your dog doesn’t have to make any decisions. He doesn’t have to be in charge. He can relax. When he relaxes, he is less anxious, less aggressive, less frustrated and less over-active.

It’s been my experience that up to 75 percent of problem behaviors in dogs are caused by anxiety, frustration or the combination of the two. The power walk, simple as it seems, by reducing the anxiety and frustration, can and will reduce problem behaviors.

However, to take full advantage of this concept, the power-walking owner needs to employ the leader principle in all aspects of his relationship with the dog.

Dogs are a hierarchical species. From their perspective, you are either above or below the other members in the pack.

If you are above, then you get all the perks that go with the status, but you also have the responsibility of the welfare of the pack on your shoulders.

Dogs who see themselves as above the others in the pack also see themselves as having to make all the pertinent decisions regarding the pack. In a wild dog pack this isn’t too difficult. But, in a human family where the dog sees himself as having to make decisions for everyone – dog and humans alike, this can cause the average dog to have the canine equivalent of a nervous breakdown.

Can you imagine the poor dog, trying to keep tabs on everyone, trying to take control of every situation, and the humans in the family don’t follow along or bow to his authority? Sometimes, they downright ignore his rules.

No wonder he’s a nervous wreck. He’s trying to create order from chaos and nobody will pay attention to him. By taking the role of leader away from the dog and placing it on the owner’s shoulders you allow the dog to relax. He no longer has to make decisions about things he cannot control.

When he truly relaxes, anxiety and frustration dissipate leaving a more calm, easy-going and obedient companion.

All dogs will benefit from the power walk. But it needs to be done regularly. Occasional walks with the owner in charge will only confuse the dog and add to his anxiety.

By combining the power walk with simple obedience exercises, owners can change anxious, destructive, or bossy behaviors and create a happy, healthy, calm and responsive companion.

One response to “Take your dog on a power walk”