Is a Bulldog the right dog for you?

The Bulldog is a massive yet compact dog of dignified stature, with a fierce expression that belies the breed’s kind and affectionate nature.

The English Bulldog is an old breed initially developed to promote the cruel sport of bull-baiting. Although the original breed must have been ferocious, the modern version only looks the part.

Today’s Bulldog (both American and English) is extreme in nearly every way, from his massive head with a wrinkled face featuring a pushed-in nose and undershot jaw, to small pelvis and distinctive “screw” tail. The significant difference is American Bulldogs have longer legs and are considered more athletic than their English cousins.

The French Bulldog is a miniature version of the English Bulldog with bat-like ears that stand up. 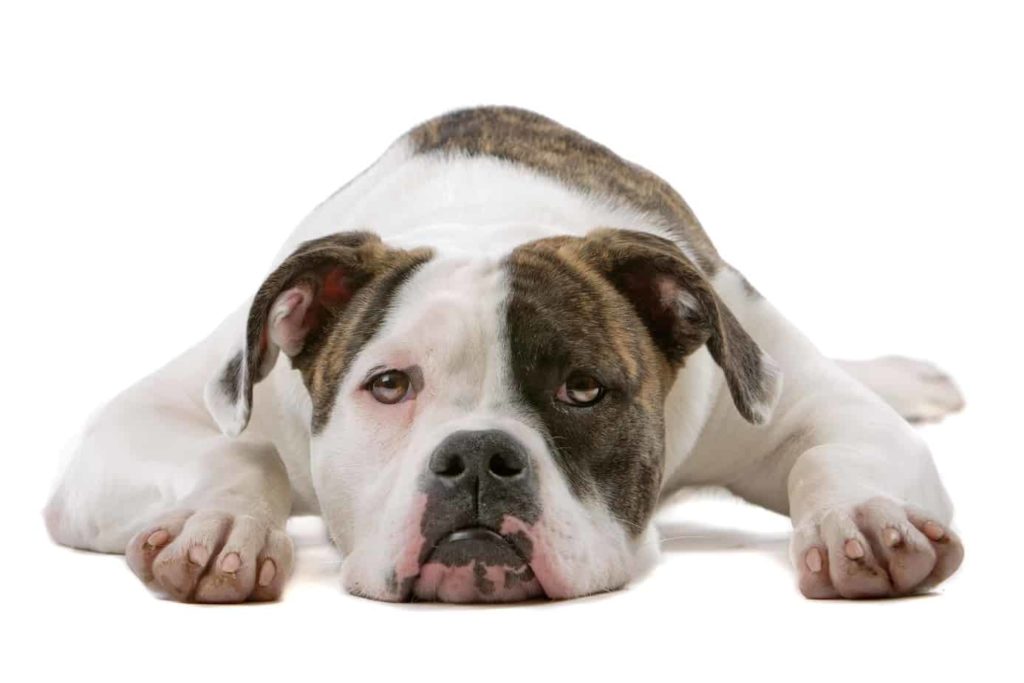 Both the American and English Bulldog have massive heads with a wrinkled face featuring a pushed-in nose and undershot jaw. The dogs have a small pelvis and a distinctive “screw” tail. The significant difference is American Bulldogs have longer legs and are considered more athletic than their English cousins.

The Bulldog is a massive yet compact dog of dignified stature, with a fierce expression that belies the breed’s kind and affectionate nature. The breed comes in various colors, including red, brindle, white, fawn, and piebald.

The dogs typically stand 13 to 15 inches tall at the shoulder and weight 40 to 50 pounds. But be sure to watch his weight, choose his food carefully because these guys can pack on the pounds!

Unfortunately, breeding for extremes can also predispose the breed to health issues.

For example, the wrinkled face creates skin folds predisposed to infection, for example. And the massive head at one end with narrow hips at the other means Bulldog puppies can only be born by Caesarian section.

Today, responsible breeders strive to reverse these health challenges, so be sure to speak frankly with your puppy source.

The Bulldog is an extremely lovable and friendly dog that doesn’t know his strength and can bowl over the unprepared with his enthusiastic greeting. He’s not particularly aggressive but tends to resist training.

He is good with children, but may inadvertently knock them down with his fist-of-a-body. Because of his facial structure, the Bulldog makes all kinds of unbecoming noises — the most polite are described as snores. 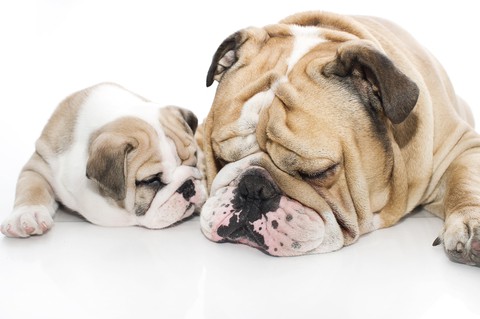 Bulldogs are affectionate. Just beware: Their kisses can be sloppy.

The typical Bulldog is a determined and courageous dog that isn’t necessarily aggressive. Excellent watchdogs, Bulldogs can be aggressive to strangers and other dogs when it has not been adequately socialized or when it does not have good self-control. Therefore, it is essential to socialize as a puppy and train, so the dog develops the necessary restraint.

Bulldogs are excellent hunters and have a strong prey drive. That impulse can make the dog tend to hunt smaller animals like other pets and small dogs.

Make sure your Bulldog gets plenty of exercise. Plan to take them on daily walks and give them time to play in the yard.

Before adopting a Bulldog, you should know that it is recommended for people who understand the psychology of the dog and its behavior within the pack. It needs a firm, calm and consistent master.

Despite their physical strength, and perhaps because of their strong character, the Bulldog does not respond well to traditional training.

It is better to approach dog training from a different perspective, using clicker training or another variant of positive reinforcement training.

You will need patience to train these intelligent, but occasionally stubborn dogs. The dog can learn tricks and follow basic obedience commands. 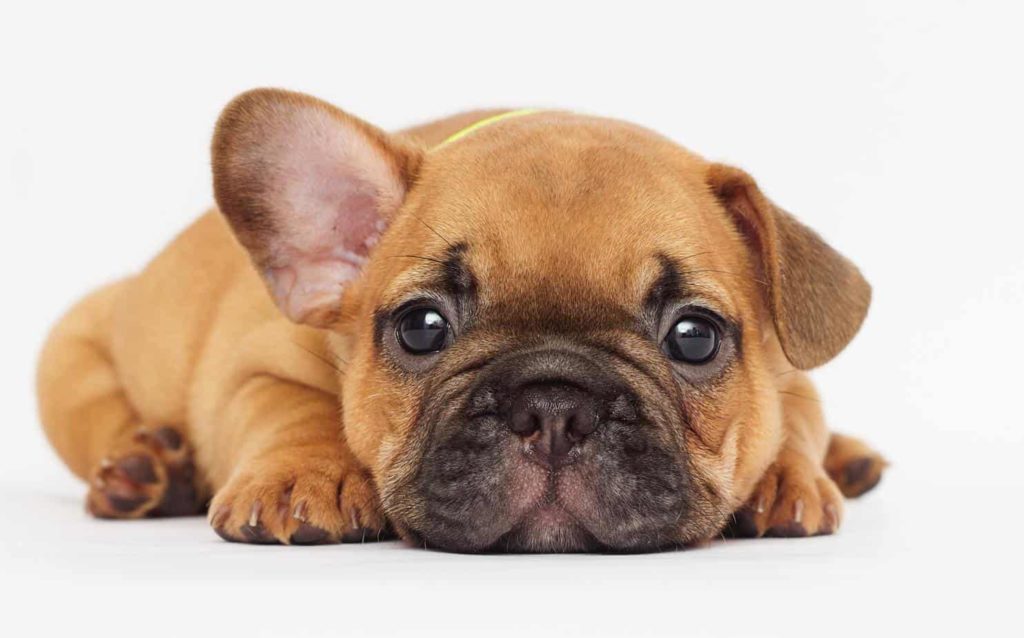 Bulldogs have enormous appetites and are prone to becoming overweight.

In general, the Bulldog is a healthy dog. It’s one of the breeds with the least amount of hereditary problems.

Two of the most common clinical problems in this breed are hip dysplasia and cancer.

Because of their height and weight, they can also develop bone problems when growing up. The dogs also are prone to obesity.

With the right care, these dogs have a life expectancy of between eight and 16 years.

The dogs require minimal grooming. Regular brushing (approximately three times per week) and bathing (only when necessary) will keep your Bulldog’s coat healthy.

With its fierce expression, the Bulldog may appear to be an aggressive dog. But the breed is affectionate and a good pet for children. To adopt a Bulldog, check Petfinder.com.

John M. Caviness is a successful copywriter at MeowEssay. This job allows him to express his opinions and thoughts on different topics, including dog care.