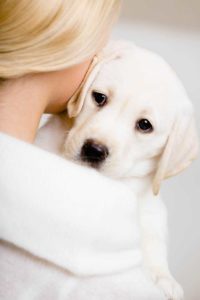 Have you ever caught yourself using dog baby talk when communicating with your dog?

If you talk in a higher pitch, elongate your vowels, use a sing-song rhythm and a slower tempo, you’re using dog baby talk — just like you would if you were talking to a baby.

Research has found that most people use dog baby talk when speaking to their pets.

But why do people do that?

According to the researchers, this type of speech is commonly used by humans to communicate with non-speaking animals whether they are dogs or babies.

Researchers have found that this form of speech seems to work more on puppies than on older dogs. Where there were no other audio or visual cues, puppies tend to be highly-reactive to dog baby talk.

That cannot be said about adult dogs who do not seem to show a difference in their reaction between baby talk and normal speech. This is at least true when the voice was unfamiliar.

In an experiment, a number of dog photographs were selected. Researchers used puppies, adult dogs, and older dogs.

The researchers recorded the voices of women speaking to each of the photographs separately. There was a control experiment in which there was no dog picture but in which the speaker addressed a researcher.

All the participating women were recorded repeating the same phrase in which the words ‘who is a good boy?’ were used.

Later, the recordings were played back to selected puppies and adult dogs.

The puppies responded to the dog baby talk. The adult dogs, not so much.

Baby talk is usually used with human babies. But the researchers found humans are likely to use baby talk with dogs of all ages. These findings give a whole new meaning to the baby schema theory. According to this theory, humans tend to respond in a way similar to the way they respond to human babies. The behavior is instinctive shows people’s natural nurturing side.

The researchers hypothesized that humans tend to use dog baby talk because they are sensitive to the baby cues inherent in the dog’s face. Some studies have found that dog baby talk is used for all non-speaking listeners. It’s how  humans instinctively alter our speech when our listeners can’t talk back. The study shows more about human behavior than about dog behavior.

Using dog baby talk with those who can’t talk

According to the researchers’ findings, people don’t use ‘baby talk’ just because they are sensitive to baby cues. In fact, humans tend to adopt this kind of speech pattern when they are looking to interact or engage with any non-speaking objects or animals.

Using baby talk comes out of the empathy that humans have for their “dormant” listeners for not being able to understand or fully master their language.

While there is no distinction on how humans speak to puppies and older dogs, baby talk seems to work more positively with younger dogs.

That could be because of the way their brains process sounds. According to previous research, baby-directed speech tends to increase cerebral activity in babies more than adult talk. It’s for this reason that infants seem more engaged when they listen to someone talking to them  in “their own way.”

No research (to my knowledge) has been done on the cerebral activity of dogs when we talk with them.

But it would be interesting to see if there is a difference between regular talk and dog baby talk to see if that stiumates the baby’s brain more. and if this stimulates a puppy’s brain.

I’m convinced my dog only knows her name because of the tone I use when I say it. But that’s a whole different conversation.