By Sara B. Hansen 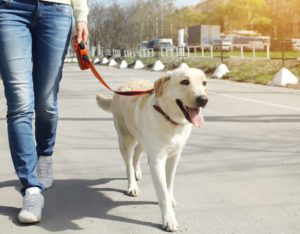 Everyone knows it’s important to walk your dog so she gets exercise. But research shows owners benefit just as much or even more because dog walks boost fitness for both owners and their dogs.

In fact, two studies show that owners may get even more benefit from their dogs from daily walks.

A British study shows dog owners exercise their pets twice a day for 24 minutes each time for a total of 5 hours and 38 minutes per week. On top of that, the average British dog owner also takes their pet out on three long walks per week adding another 2 hours and 33 minutes to the total.

By comparison, people without dogs spent an average of 1 hour and 20 minutes per week exercising at the gym or going for a walk. Even worse, according to the British study, nearly half of non-dog owners (47 percent) get no exercise at all.

That study shows people who owned and walked their dogs were 34 percent more likely to meet federal benchmarks on physical activity.

And the study also showed people who walked their dogs generally walked about an hour longer per week than people who owned dogs but did not walk them.

Too many overweight dogs

But there’s also some disturbing news on the dog-walking front. Many owners aren’t giving their pets enough exercise.

Over half of U.S. dogs and cats are now overweight or obese, according to a study conducted by the Association for Pet Obesity Prevention. One-fifth of dogs and cats are obese — weighing 30% over a healthy weight.

Overweight pets suffer from a multitude of health issues including diabetes, kidney failure, and cancer.

Bottom line: Daily dog walks boost fitness for both you and your furry best friend, so grab your leash and give your dog that walk you both need.

Sara B. Hansen has spent the past 20-plus years as a professional editor and writer. She decided to create her dream job by launching Dog’s Best Life. Sara grew up with family dogs, and since she bought her first house, she’s had a furry companion or two to help make it a home. She shares her heart and home with Sydney, an Australian Shepherd-Corgi mix.
You can reach Sara @ [email protected].