The more you communicate with your dog, the more words he or she will learn.

Dogs learn by association; good and bad. He probably associated the word tea, for the letter T. What he heard was 3 sounds; “cup-of-tea,” which to him sounded like O-U-T. That’s a positive association in his mind…it means going outside! He receives a positive reinforcement, by having the door opened, so he can go outside. To him, “T” is a good sound! 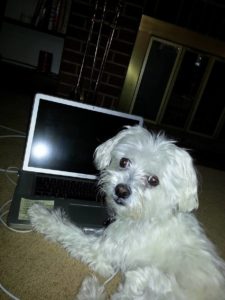 Dogs have an amazing aptitude to associate words with objects or actions. The average family pet, with minimal human-canine interaction can recognize as many as 20 words.

Dogs that have more interactions with their people, especially positive exchanges, can associate approximately 50 words. A number of behaviorists believe there are dogs that can associate up to 350-400 words!

Think for a minute, the fact dogs associate their name with themselves, is pretty fascinating.

Dogs don’t have names for each other. When they see a dog they are familiar with, they respond to the other dog’s name, because they have made an associate with the sound of that word, to that dog. We are the ones who have individualized them by naming them. By using that sound over and over, and praising them for responding appropriately, they learn their name.

They even learn to associate the sound of a dog’s name they don’t like, because we have trained them to associate that specific sound, with that particular dog.

Many dogs even learn their owner’s name; because they hear us calling each other by name, and our response to that sound. It doesn’t take them long, before they associate the sound of our name with us.

Here are a few other things to ponder…bilingual dogs! Dogs that hear more than one language being spoken in their home; soon learn to associate objects and actions with two sounds!

Ironically, it doesn’t even have to be a sound for a dog to make an association. Dogs owned by the hearing impaired, or dogs that are themselves deaf, are capable of quickly learning sign language by using hand signals to communicate. The owner can communicate as easily with their pet, using only sign language, as the rest of us do speaking to our dogs. It’s all about positive reinforcement! Now, how neat is that?

Bottom line: The sooner you start, the “smarter” your dog will be! Start off working with your dog on making simple day-to-day associations, and keep raising the bar. Reward them with positive reinforcement each time they make the correct association. It doesn’t matter if they are 8-weeks old, or 14-years old; it’s never too late. It does not matter if they can or cannot hear, or if you can or cannot hear; they will amaze you.

Challenge their brains. Dogs love learning something new every day!