One of the leading causes of canine depression is the lack of canine companionship, interaction and socialization. 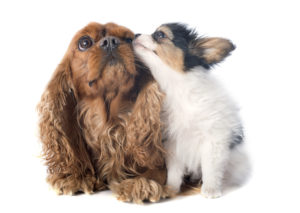 As with scores of animals, including us, the old saying “birds of a feather…” is really true.

Dogs, being descendants of wolves, are indisputably social creatures. They relate to, and thrive in a pack environment.

Canine companionship, interaction and socialization is important to their social, mental and even physical well-being.

For domestic tranquility around your house and family, your dog’s status in your pack should always be at the bottom. However, with their canine packs, they may be at the top, middle or bottom.

To be well-adjusted, well-behaved dogs, puppies need to be socialized as early, and as much as possible with new people, other animals, and other dogs. During the first 20 weeks of a puppy’s life, it is fundamentally important to expose them to new, positive and exciting experiences, in order for them to learn sufficient and appropriate coping skills.

It is egotistical on our part to even conceive we are all they need. Fact is, your dog needs dog friends as much as you need human friends. And dogs who don’t have opportunities to interact with other dogs have a much higher risk of canine depression.

For your pet to be content, and willing to put up with what we expect from them, it is only fair they are given the time and opportunity to just be a dog.

What dogs teach each other

Even as young as a few weeks old, litter mates are schooling each other the rules of being a dog.

As most dog owners will attest, the one thing their pet hates more than anything else is being ignored.

Next, they train each other the rules of certain games, such as wrestling and tug-of-war. Both are games of challenge and pack status shifting. This is why we should not play either game with our pets until they have an “off” button.

That button is the obedient and immediate response to a given basic command to end the game. It could be something as simple as the command “enough.” As soon as your dog hears that command, the game ends…and you win.

With dog-on-dog games, if your puppy doesn’t quite grasp the concept of bite inhibition; another dog will undoubtedly highlight the lesson. Bite too hard, I’ll ignore you or, I’ll bite you back…even harder. Let’s face it; we’d look pretty silly doing that. Not to mention, a mouthful of dog hair is probably not very appetizing.

Tug-of-war is one more canine game where rules are taught and manners are learned. Watch when two dogs go at it, tugging away on a rope or toy. Eye contact is frequently the key to psyching out the challenger. Watch for that dead eye stare of defiance. There has to be a winner and a loser. One will eventually blink, surrender or lose interest. No hard feelings. To them, it simply, you get to wear the “Boss” badge now…we’ll play again for who wears it next time.

What you will find interesting is how your dog plays a different role with each group of dogs they are with. It’s almost like kids in a playground or on a team. Some are bold and self-confident. They step right in. Others are less confident and wait to be invited.

You can prevent dog depression and help your dog stay in high spirits, build up their confidence, and be healthy mentally and physically simply by giving them the opportunities to make canine BFFs (Best Friends Forever).

Take advantage of local dog parks, dog clubs, and doggie daycares. They offer your pet the choice to sit back and watch, or just be a plain, old dog. There, with other dogs, they can play rough, run all they want, get wet or dirty, bark, howl, have fun and go home happy and dog tired.

Bottom line: Just as important as it is for you to have someone who speaks your language, understands and accepts you, the same is true for your canine companion.

You don’t speak their language. Inherently, they understand each other. Their tails, ears, and eyes communicate volumes of information. So, don’t have a sad dog, prevent canine depression and keep your pet happy, healthy and well adjusted.

Let them have as many canine friends as possible. It will amaze you how much they will look forward to spending time together, and who knows, you may make a few new friends too.

What you will see is the change it makes in them when they get home. A tired, well-socialized dog is a happy dog!