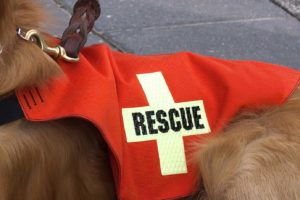 Natural disasters can be catastrophic, killing hundreds and leaving towns decimated for years. In these challenging times, man’s best friend often plays a significant role both by serving as search and rescue dogs and by providing emotional support.

Dogs are ready to be an asset when floods, hurricanes, tornados, or wildfires hit. In addition to being man’s best friend, they are their protectors, and they play a huge role in disaster relief when we need them most.

Natural disasters have a massive effect on not only the cities they directly impact but the entire state where they hit, as disaster relief comes with a high price tag. Often, states do not have the resources to handle disaster response properly. As a result, they seek help from the Federal Emergency Management Agency (FEMA), which exists to help with the burden of disaster response by providing housing assistance, assisting with public health services, and helping rebuild communities.

These services are more critical than ever with the increased damage caused by natural disasters — a change that scientists say is the result of climate change. These disasters impact human lives and communities. In these emergencies, some people are forced to escape with what they can, leaving behind their homes and businesses. Consequently, 25% of businesses that experience a natural disaster end up closing.

Those closures also affect animals and animal companions in the area. Even when people do everything they can to protect their pets, dogs and cats are often displaced during natural disasters. When humans are unable to escape, animals also can be trapped. They frequently end up becoming lost or abandoned.

For people who are not prepared to weather a natural disaster, it’s challenging to recover from the physical destruction and lack of stability. When natural disasters require evacuations, all businesses and organizations, including pet shelters, are required to leave the city for their safety.

However, the mass evacuation of animals to a different city is dif, and it requires a lot of pre-emptive work to save the animals’ lives. Even some pet owners are required to temporarily forfeit their dogs to emergency shelters in an attempt to keep them and their families safe, which can be excruciating to families.

Dogs can be used to help in any natural disaster where people go missing, as their vision, hearing, and sense of smell make them efficient searchers that can locate people when they are lost among the debris. Search and rescue dogs are trained to find human scents, which helps them sniff their way to people who may be trapped in areas where they can’t be seen. This can guide emergency response teams to people more quickly, which can aid them in getting the medical services they need faster.

Dogs have a strong ability to empathize with humans, which makes them keen searchers during human-made and natural disasters. Over the last couple of decades, dogs have helped extensively in search and rescue efforts. After the terrorist attacks on September 11, 2001, more than 300 search and rescue dogs searched ground zero unrelentingly for signs of life.

In 2011, a magnitude 9.0 earthquake occurred off the Pacific coast of Japan. The most powerful earthquake to hit Japan triggered a tsunami that killed over 10,000 people. In the aftermath, search and rescue dogs from around the world were sent to find survivors. During these tragic situations, search and rescue teams work tirelessly.

Dogs play a significant role during natural disasters by comforting victims and their families who have been displaced. After natural disasters, dogs often are used as emotional support animals, as they can help reduce stress and instill a sense of normalcy after a trauma. Emotional support dogs don’t need specialized training; they just need to be your friend and provide you with comfort.

In addition to working as rescue dogs, pups also often can be found in hospitals or in other public areas, offering comfort to scared children and people who have experienced loss. They also make great companions for emergency personnel, on which search and rescue missions can take a considerable toll. The loving nature and patience of dogs have made them ideal disaster stress relief animals after tragedies like the 9/11 attacks and disasters like Hurricane Katrina, as they can be comforting to be around for both kids and adults.

If you live in an area that is prone to natural disasters or have been notified of a particularly dangerous weather season, it’s a good idea to take precautionary measures with your pet. This includes making sure they can be identified in the chance that they get spooked during the disaster or evacuation and runoff. Making sure your pet is microchipped can ensure that people can identify your pet, which will help get them back to you.

Natural disasters are tragic, and it can be extremely difficult for towns and communities to rebound from them. However, when disaster strikes, search and rescue dogs are often ready to help emergency personnel save as many people as possible. Those who are not actively rescuing people who are lost are comforting families and others who are experiencing loss. The empathy and love that dogs emanate make them incredibly helpful to people after a natural disaster.
– Noah Rue