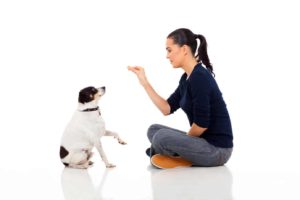 Operant Conditioning focuses on the relationship between behavior and the consequences and how those consequences influence the behaviors. And operant conditioning can be a valuable tool for dog training.

So basically behaviors have consequences.

There are two main types of consequences: reinforcement and punishment.

Reinforcement makes it more likely you will do the same behavior again.

Punishments make it so that you will be less likely to do the same behavior again.

Both can be positive or negative. You might think positive mean good and negative mean bad, but it has nothing to do with it.

Operant conditioning happens everywhere in our daily life, maybe one time you helped your mom with her shopping and she thanks you, this is positive reinforcement, it will make you more likely to do it again because of her response. If she didn’t add the word thank you, you probably would less likely to do it again.

Positive reinforcement is the same as positive punishment, only now you’re punishing instead of reinforcing it.

Take this, for example, you were over the speed limit and got caught speeding, in this scenario you will be given a ticket so that you won’t speed again.

As for the negative punishment, your car or license might get taken away to keep you from speeding.

So whether or not you know about operant conditioning, it has always been in your life.

👩‍🎨 Ask Bertha to Create an Image
Enter Text to Create Image
Choose a Style
Choose a Trend
Choose an Artist
Image Size
Get Our Free Monthly Newsletter
We use cookies to ensure that we give you the best experience on our website. If you continue to use this site we will assume that you are happy with it.OkRead more