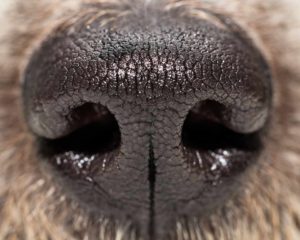 A dog nose come in all sizes, shapes, and colors, but they all do the same thing besides the obvious; they keep your dog informed. Bigger, longer, and wetter noses can suck up more information, just like a vacuum cleaner.

Many embarrassed, exasperated and inexperienced dog owners wonder “Why does my dog have to sniff everything?” The answer is, there are at least 220 million reasons.

However, the simplest answer dog trainers and behaviorist give, “Because the nose knows!”

Most dogs have between 200-250 million scent receptors. You have approximately a measly 5 million. Their combined olfactory “system” is 4 times greater than ours. The 7 square meters of nasal membrane in your dog’s nose is open for business 24/7 and it’s screaming for information.

A dog’s sense of smell is stronger than their sense of sight. Blind dogs do just fine, sniffing their way through life.

We have social networks, computers, and 24-hour news to fulfill our addiction to information and socialization. So does your dog.

The difference is their computer and social network are in their brains. A walk around the neighborhood or dog park is overflowing with old and updated information. Sniffing along the way is also providing the GPS system in your dog’s brain with maps.

Dogs that are walked more often tend to get “lost” less often than those that aren’t walked regularly. Their noses and the GPS in their heads help them to find their way home.

Did you know a single drop of urine can provide your dog with volumes of information? The powerful dog nose lets them determine who was there, when they were there, what they ate, if they are male or female, neutered or spayed, how old they are, if they are dominant or submissive and even if they are in a good mood or not!

Scent hounds have been our hunting companions for thousands of years. Their larger nose and floppy ears made them invaluable to human hunters. Even back in the Middle Ages, it was known that bloodhounds had an innate sense of smell, and they were successfully used as trackers, much to the chagrin of runaway criminals and poachers.

For centuries it has been believed and some still do, that dogs with big, long noses and black nostrils that are spread out, make for the best trackers. It does make sense; as their olfactory chamber would be larger and it could store and send more information faster to the olfactory part of their brains than say a dog with a flatter nose like a bulldog or pug.

Have you ever noticed your puppy or dog taking short, rapid inhalations and exhalations while sniffing something? The dog is maximizing the detection of that odor.

When a dog licks its nose, wetting the membranes increases the dog’s ability to collect samples of the odor, and store that information in his private library.

It is even though your pet can store 3-D images of various odors. That’s another reason why they dogs excel in tracking, hunting, drug searches, termite, bed bug and other insect infestations, search and rescue, as cadaver dogs and now, some are being tested and used to detect cancer.

Their ability to discriminate between odors also makes covering up an odor practically impossible! Plus, an object needs only to be held for as little as two seconds, and a dog will know who has touched it.

For example, I recently mailed a package to a friend. Within minutes of bringing it into her house, her hound mix, who I had trained, zeroed in on my scent on the envelope. That same dog recognizes my voice when the phone is put on speaker.

Bottom line: Now that you know more about a dog nose and how it works, maybe you won’t be so uptight or embarrassed when they nose around. Always control an inappropriate behavior before it becomes obsessive, but appreciate that it’s absolutely natural for your dog to want to sniff everything and everyone.