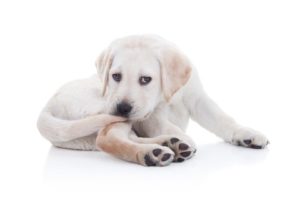 Does your puppy or dog suffer from canine obsessive-compulsive disorder?

If they have the urge to unconsciously perform repetitive, self-rewarding, inappropriate behaviors such as shadow/light chasing, tail chasing, fly snapping, excessive barking, sucking, chewing, fixation on certain objects, and spinning, then the answer is a resounding yes!

Something in their heads, generally due to medical problems, boredom, inappropriately learned play, injury, anxiety, lack of socialization, excessive energy, lack of direction/training, excessive crating/tethering, neglect or abuse triggers the stimuli. This in turn, prompts a trance-like lack of self-control and total fixation on the object of their obsession.

Puppies and dogs that have been tethered or crated for extended hours, often find ways to amuse themselves. Some learn to incessantly bark, chew, suck or lick on themselves. Others learn to spin, run in circles, chase their tails, or snap at real or imaginary insects.

In most cases, the animal has learned this behavior gets your attention. To a dog’s way of thinking, that’s a good thing.

Sometimes, we are the cause of this inappropriate behavior. One example is the use of flashlights and laser pointers. Many an exasperated owner has unwittingly created their own monster, by using them as play items. They have literally “trained” their dog to respond to certain stimuli.

Puppies and dogs rescued or adopted from shelters, unfortunately, cannot sit down and discuss the issues of their former life with you. Instead, you’ll have to watch your dog for clues. Learn their behaviors. Figure out what may trigger that particular OCD behavior.

Dogs usually do let us know. You have to learn how to read them. They often can and do, in their own way, let us know if they have been neglected, or abused. Watch for the signs. They can include OCD behaviors, refusal to respond to commands, inability to bond, anxiety, fearfulness, assertion/aggression, shyness and cowering.

Determine the cause of canine obsessive-compulsive disorder

First, make sure there are no medical reasons. Once you and your veterinarian have ruled out parasites, allergies, infection, injury, vision problems, epilepsy or other neurological problems, you can move on to other suspected sources.

Puppies and dogs sometimes obsess on a new injury or procedure such as neutering or spaying, with excessive licking. If that is occurring distract and redirect their attention to something else, BEFORE it becomes an OCD behavior.

Honestly, ponder whether you without knowing may have caused the problem. Did you encourage your puppy to chase their tail or bark for attention?

Did you use a flashlight, laser pointer or other objects to encourage your dog to chase shadows or beams of light? Dogs are predators…most like to chase anything that moves.

Is your pet crated or tethered at length? Do they have anything to amuse or mentally stimulate themselves within a positive manner, while confined?

Do you reward your dog for bad behavior without knowing it? Laughing or yelling at them encourages it by giving them attention. You need to distract, redirect, walk away and ignore. Most dogs will follow you.

Do you provide enough mental stimulation and physical exercise? What types of games do you play with your dog? Do you inadvertently reward for inappropriate behaviors?

Do you walk your dog? The greater part of bonding with a puppy or dog is done during walks. Walking your dog teaches you volumes about your pet.

Is your dog socialized? Often, dogs with socialization issues have learned to occupy their time and energy, with inappropriate behaviors. Many suffer from anxiety and separation issues.

Do you personally interact with your dog? Or do you just toss them out into the backyard alone? If left to their own devices, dogs will find some way to amuse themselves.

When possible, identify and remove the object of obsession.

Next, distract and redirect their attention. Correct them immediately when you see them slipping into their OCD behavior. Use a no reward marker. That is any sound that gets their attention to focus on you, not their obsession.

We convincingly use the sound “EH!” or the command “Leave It!” with a clap or two. Tell them to “Focus!” and point to your eyes with your index finger. Praise and/or reward them for their focus. You have distracted them and redirected their focus.

Don’t say another word, and immediately walk away and ignore them. Dogs hate to be ignored. Most will follow you. Luckily, dogs are not multi-task oriented. They can only focus on one thing at a time. Make that focus you, or redirect their attention to an appropriate object.

Another suggestion to distract and redirect is to use the no reward marker, get your dog to focus on you, and give them a command, such as “Sit!” or “Down!” Again, they can’t do two things at once. The objective is for you to control the situation BEFORE they slip into their canine obsessive-compulsive disorder behavior.

Mentally stimulate them. Find games like hiding a treat or their kibble and interact with them to find it; like the Hot and Cold game, you played as a kid. They are using their brains, interacting with you, and having fun!

Positive reinforcement! Praise them whenever their behavior is appropriate. Dogs learn by association. They will associate appropriate behavior brings great rewards, mainly attention.

Training. Enroll in positive reinforcement, punishment-free puppy kindergarten or obedience class. It helps to create a bond, teaches you leadership skills and also socializes your puppy or dog.

Get active. Find an activity you and your dog can enjoy together. Flyball, agility or rally competitions are great ways to have fun, work on training and get plenty of exercise.

Give your dog a job. Dogs love to be needed. It is interesting how many dogs eagerly slip into the working dog mode when given a job.

Add a challenge to your walks. Try using a backpack when you go for walks. It’s like giving them a uniform! Some dogs take to them immediately, others need a little time to adjust. You can weigh it down with a couple of cans of soup to make them work harder on that walk.

Bottom Line: Behavior modification to combat canine obsessive-compulsive disorder takes time, patience and consistency. Years ago, we had a stray Lab puppy show up at our door that was a fly snapper. He had no intention of leaving! We knew nothing about his history. However, we did notice whenever he got anxious he’d snap at imaginary flies. By keeping him happy, busy, focused, and tired, his canine obsessive-compulsive disorder behavior eventually disappeared.