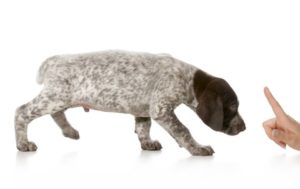 Dogs know the difference between right and wrong. But only in the context of their own culture or within the definitions of traditional dog behavior.

One example of a culturally-specific objectionable behavior for humans is showing of the bottom of one’s feet in public. In some countries, crossing one leg over the other with the bottom of your foot showing can get you thrown out of a restaurant. Unmarried couples holding hands in public can be jailed. These are taboos that mean nothing to the outsider but are an accepted fact of life for those within the culture.

It’s the same with dogs. Dogs sniff each other’s rear-ends. They don’t shake hands; they smell each other. When well-meaning owners try to pull dogs apart when they are in the act of sniffing, a fight may break out. Each dog thinks the other started it by stopping the ritualistic sniffing dog behavior.

When I am asked to intervene in a family with a dog who has been designated the leader of the household (from the dog’s point of view, anyway), I am frequently told by the owner that the dog “knows better,” an assumption based on the owner applying human culture-specific mores to the dog.

From the owner’s point of view, the dog stole the shoe and destroyed it because the dog is trying to get back at the owner for some perceived transgression. From the dog’s point of view, as the leader of the household, anything he finds not in the immediate possession of another family member is his.

It’s “finders keepers” as far as he is concerned.

Canine-specific cultural mores are fairly hard-wired into a dog’s brain. There is taboo dog behavior and mandatory ritualistic dog behavior. Most dogs have to learn to ignore many of these obligatory dog behaviors in order to co-exist peacefully with humans.

We don’t allow dogs to sniff our privates, we refuse them access to our food, even when we are done with it, we get upset when our dogs discipline our children for indiscretions, and we object to our dogs marking territory in the house.

From our dog’s point of view, we are a very demanding, uncooperative, culturally lacking lot. But they love us anyway, as is apparent from their willingness to put up with us and our strange customs.

We shake hands with people we don’t even like, we throw away perfectly good food, we allow our children to run all over us without discipline, we mask our own scent with strange, horribly smelling concoctions, and we don’t play, or recognize the invitation to do so. It’s amazing our dogs put up with us at all.

By learning as much as we can about dogs, their language and culture and especially dog behavior, we’ll have an easier time guiding them into proper human-sanctioned behaviors. By understanding why they do the things that they do, it will make changing dog behavior easier and living with them a pleasure.