Pawing is one of the most vital tools your dog uses to communicate with you. 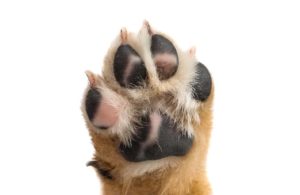 What does dog pawing mean? Most new, inexperienced dog owners do not realize that dog is a simple language to learn.

Once you learn it, you understand your pet is communicating volumes of information using their versions of sign and body languages. Dogs also use facial expressions, licking, tail positions, and barking to communicate.

Too much pawing is one of the most common complaints by dog owners.

Weary owners, usually of new puppies or demanding, and often incredibly spoiled dogs, complain that they are being shredded to ribbons by their pet’s sharp nails, and they don’t know what to do about it.

Observe your pet’s sign and body language. Learn dog so you can better understand what your puppy or dog is trying to tell you by pawing.

People often wonder what pawing means and why dogs put their paws on them. The truth is, there are several reasons why our canine friends paw us.

All are signals of communication, we have to know how to speak dog, so we can understand what they are trying to tell us.

Dog pawing behavior is a natural and inherent way for your puppy or dog to get you to “focus” on them. Depending on how often your dog resorts to this method, it can be an acceptable or annoying habit.

Pawing communicates, “Hey, you up there, it’s me down here. I want your attention, and I want it NOW!”

If you continuously give your dog attention each time he puts his paws on you or digs on you, you wind up creating a behavioral issue. You don’t want to create a situation where your dog keeps pawing at you to get your attention.

By knowing when, where, and how often to respond or ignore your dog’s pawing behavior, you can curtail that demand before it becomes a problem that requires behavior modification.

Pawing is the universal doggie sign, “Hey you! I want to play! Do you wanna play with me?” It’s how dogs communicate with each other. One dog pawing other dog is a sign it’s time to play.

Since your puppy or dog doesn’t realize that you don’t speak dog fluently, your dog will be persistent and keep pawing until they get any reaction from you.

Have you ever watched puppies or dogs interact together, where one usually initiates playing, by pawing the ground or pawing at the other animal?

If the second dog is interested, they often respond by pawing. The message is now crystal clear to both of them, “Let the games begin!”

It also can be a sign of submission. In simple dog language, it’s the dog’s way of letting another dog know, “OK, you’re the boss, and I am submissive.”

When your dog puts his paws on you, he may be demanding attention, seeking comfort, or asking for forgiveness. The latter two are more likely when your dog rests his paw on you without moving it. Your dog is telling you, “I need some consoling and reassuring,” or “I’m sorry for what I did. Please forgive me.”

That’s especially important if you need to stop a dog from pawing at your face.

Once you understand what your dog is trying to say, it’s easier to formulate a plan to correct or control the behavior. For example, if your dog only touches you occasionally when he needs comforting, you probably don’t want to prevent him from doing so.

If, however, your dog uses pawing or scratching you to get your attention, then you can work to modify that behavior.

Use commands to stop bad behavior

When your dog paws at you, give your dog a “No” or “Stop” command. Then tell your dog to sit. Once your dog sits calmly, give the dog a treat and lots of praise. You may have to do this repeatedly for your dog to learn the message, especially if your dog has been pawing you for a long time.

Pawing also can be an example of dominant behavior. If your dog continues to paw you and ignores your commands to stop, your dog may be trying to boss you around. Try walking away from your dog or turning your back on him. Ignoring your dog will teach him that pawing or scratching you is unacceptable behavior.

Again, you may need to do this several times to teach your dog pawing won’t get the result he wants.

Never yell at your dog or hit him. Negative attention could reinforce bad behavior, or worse, make your dog fearful and potentially aggressive.

If your dog scratches at the door as a signal that he wants to go outside, you’ll have to decide whether you wish to continue using that method. If you’re going to eliminate all scratching, you can teach your dog to ring a bell to let you know he needs to go out. Or you could teach your dog to give one short bark as an alert. Some people even install a dog door so their pets can go outside independently.

Dogs that love to paw (and dig)

Dogs also tend to favor one paw over the other, just like humans do. The majority of animals are right-handers. A much smaller percentage are left-handers. Quite a few dogs are ambidextrous or use both paws equally.

Breeds more likely to use their paws to communicate also more prone to digging. Dog breeds that use their paws a lot include boxers, dachshunds, terriers, beagles, miniature schnauzers, Siberian Huskies, Alaskan Malamutes, and Australian shepherds.

Observe your dog’s body language. If you learn to understand dog mannerisms, you will better understand what your puppy or dog is trying to tell you by pawing.

That way, you can control the action before it becomes a severe behavioral problem.

Your dog will be impressed when you become as bilingual as you expect them to be.