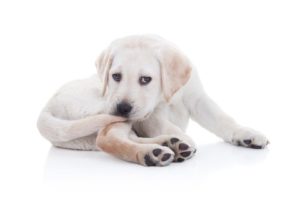 At one time or another, most puppies or dogs chase or bite their tails. It’s something to do, and it’s fun. Many dog owners find it amusing. But if tail biting is not corrected early enough, however, it can become canine obsessive-compulsive disorder (OCD).

Symptoms of OCD in dogs

Symptoms of obsessive-compulsive disorder in dogs focus on tail chasing, tail biting, or other obsessive behavior.

If you ignore tail biting or tail chasing, which also are anxiety symptoms, it can become a severe behavior disorder. Dogs with OCD can chew their tails into a bloody mess, which causes infections. Some secondary infections have been so severe that the dog’s tail had to be amputated.

This doesn’t mean you have to freak out if your dog happens to spin around and nibble on its tail. It could mean the dog has an itch or feels something crawling. But if you observe obsessive tail biting or obsessive tail chasing, you need to be concerned.

Treat a dog with OCD

If your dog doesn’t respond to training or other efforts to stop tail biting, check with your vet. Dogs with higher cholesterol levels tend to chase and bite their tails more often than dogs with average or lower cholesterol. A change in diet or medication could solve the problem.

The sooner you address tail biting, the happier you and your dog will be! Don’t put it off. Don’t wait until your puppy  becomes OCD.

Karen A. Soukiasian is the owner of Good Dog! — Dog Training in St. Augustine, Florida. You can follow Karen on Facebook.