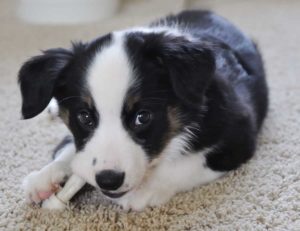 Puppies are born without teeth and begin teething at about three weeks. Those sharp little puppy teeth are called  deciduous or “milk teeth.”

By the time puppies are six to eight weeks old, they have a complete set of 28 teeth that are also known as “baby teeth.”

Similar to human babies, puppies target various objects to gnaw at and chew on in order to ease the itching of gums and discomfort during this phase.

Some dogs, however, never seem to outgrow the need to chew even after the puppy teeth phase is long over.

Did you know that your puppy’s age can be determined by taking a look at its teeth? While different breeds vary in terms of  the timing for puppy teeth eruption, most of the progression follows a similar timeline.

A teething puppy, unlike a teething baby, won’t cry and fuss with the pain of teething. Instead, your little bundle of fur will be more likely to chew on any object he might be able to get into his mouth.

That’s where your discretion should come into play.

As a pet parent, it is your responsibility to offer safe, good-quality chew toys to your puppy to help ease the discomfort of teething.

Good chew toys are flexible, soft and bend easily. Avoid anything that is hard, breakable or difficult to bend.

Most veterinarians believe the earlier your puppy gets accustomed to having you handling its mouth, the better it will be for his dental and oral care in the future.

Starting in a slow and playful way will make it easier for both of you.

Brushing regularly with a soft-bristled toothbrush using toothpaste made specifically for puppies will help keep cavities and health problems at bay.

Pete Decker is the lead editor at TheGoodyPet.com. Pete loves to share his passion for pets through snippets of interesting and helpful information. You can find more from Pete on his website or by following The Goody Pet on Twitter or Facebook.