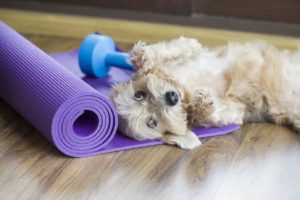 The 5,000-year-old art of yoga currently has more than 11 million practitioners in the U.S., according to WebMD. Yoga serves different functions for different people, including reducing stress, increasing flexibility, improving stamina and more. Pet ownership, especially dog ownership, has been associated with decreased health risks. One growing method of combining the benefits of yoga and dog companionship is doga, the practice of incorporating dogs into yoga classes and exercises.

The Benefits of Doga

Some practitioners say yoga is only stretching if it doesn’t involve focus on the mind-body connection. However, stretching is what some people are looking for, and doga does involve a focus on connection — connection is between dog and human. Doga can be a way to deepen the emotional bond between pet and owner while at the same time accomplishing goals involving flexibility or rehabilitation for one or both. Spine exercises that are very similar to those found in yoga are used in post-surgical rehabilitation programs, for example.

Who Should Do Doga?

Most people who are attracted to doga are the type who want to take their dogs everywhere. However, people who want to focus on their inner experience and their own mind-body connection might be better served by taking a human-only yoga class and spending some time playing with their dog. Similarly, while most dogs enjoy going to doga classes — even hyper canines often calm down fairly quickly — not all dogs enjoy actually enjoy doing doga.

Hyper dogs are usually welcome, but dogs with serious dog aggression problems are often not. Dogs usually need to have up-to-date vaccinations and some instructors are leery about involving puppies, whose bodies are still developing. Older dogs are usually very welcome, however, and can benefit greatly from the gentle stretching to help with joint pain and muscle stiffness. It is also easier for smaller breeds — like corgis, dachschunds and toy poodles — to get into yoga poses as opposed to larger breeds such as Kuvasz or St. Bernards, according to the NY Daily News.

Getting Started with Doga

Doga is much more popular in some areas of the country than others. California, New York and Florida are some of the states where it is most popular, but classes are offered in many big cities. Luckily, there are other resources for people who don’t live near a doga studio. The Lightfoot Way offers an e-book with full-color pictures of 23 doga poses, and this playlist of Animal Planet videos shows doga being performed by human Kari and dog Charlie.

It is generally recommended that people start out in yoga by taking classes with an experienced instructor so they can learn how to do the poses safely. Because human yoga classes are much more encompassing than doga classes, the aspiring doga practitioner with might want to learn in a human-only setting first so they can become comfortable with the practice. Once you’re ready to incorporate your pooch, make sure safety for canine participants always comes first, and no pose is ever be forced.

Kathy Lively is a film teacher and critic. She loves weird B films, silly romance flicks and pugs.